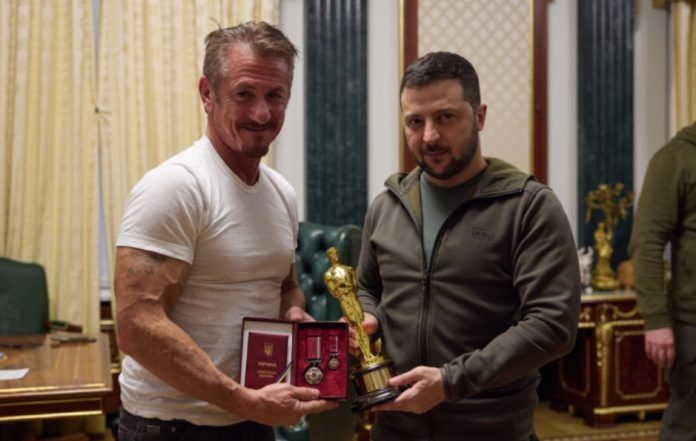 “When you win, bring it back to Malibu”

Sean Penn presented one of his “Oscars” to the President of Ukraine Volodymyr Zelenskyy during a trip to Kiev.

The actor, who over the past year has repeatedly visited Ukraine during the Russian invasion of the country to shoot a documentary, presented Zelenskyy with a statuette as a sign of support.

As seen in Zelenskyy’s Instagram video (November 8), Penn tells him: “This is for you. It’s just symbolic stupidity, but if I find out it’s here, I’ll feel better and strong enough to fight.

“When you win, bring him back to Malibu, because I’ll feel so much better knowing there’s a piece of me here.”

In the video, Zelensky later presents the actor with the Order of Merit for “sincere support and a significant contribution to the popularization of Ukraine in the world.” Penn’s name is on the plaque.

Penn’s Oscar will remain in Ukraine until the end of the conflict with Russia. He won two Oscars for Best Actor, the first for “The Mysterious River” in 2003 and the second for “Milk” in 2008.

Earlier, the actor was praised for his contribution to supporting Ukraine when he visited the country in February. A statement from the Office of the President at the time read: “Sean Penn demonstrates the courage that many others, in particular some Western politicians, lacked. The more such people — true friends of Ukraine who support the struggle for freedom — the faster we will be able to stop this heinous invasion of Russia.”

In March, Penn promised to “melt down” his Oscar if the Academy did not ask Zelensky to speak during the award ceremony in 2022. Although he did not appear, a statement of support for Ukraine was made during the event.

Sales have dropped 97% in the last nine months: Is the...