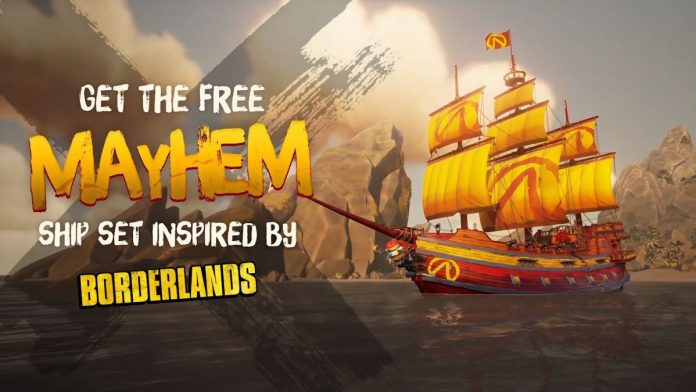 Sea of Thieves x Borderlands: Rare’s multiplayer pirate game announces new content during the Gamescom conference. New Borderlands-inspired ship.Sea of ​​Thieves will have a new ship completely free under the name Mayhem, which will have its own event. Rare, the English studio in charge of developing the game, confirms a crossover with the popular 2K Games franchise Borderlands, but it will be limited. All title players will be able to enjoy the Mayhem event from August 24 to September 7, 2021.

As we can see in the video, published during the Xbox conference at Gamescom 2021, the ship is themed and will arrive accompanied by content; Although it will not be as big an expansion as the one we saw last June with Jack Sparrow, from Pirates of the Caribbean.

Sea of ​​Thieves is available on Xbox One, Xbox Series (enhanced with next gen patch) and PC; also on Xbox Game Pass, where it accumulates millions of players every month.

Hopefully we will have more surprises this week at Gamescom 2021. The Opening Night Live event will serve as the culmination of the German show, with more than 30 games in a two-hour broadcast. Take note: the conference will be held this Wednesday, August 25 at 8:00 p.m. (CEST); We will have a 30-minute preview starting at 7:30 p.m., but the main course will be at 8:00 p.m., peninsular time in Spain.

The list of games that we will see yes or yes in the conference is quite long. If we stick to the titles confirmed by Geoff Keighley himself, the main organizer of the event, there will be the first preview of the Call of Duty: Vanguard campaign, SAINTS ROW, LEGO STAR WARS: The Skywalker Saga, TMNT: Shredder’s Revenge, TMNT : Shredder’s Revenge, Tales of Arise, Genshin Impact, Super Monkey Ball Banana Mania or Death Stranding Director’s Cut, among others.

Knowing that companies like Bandai Namco and Ubisoft will be at Gamescom, it is to be hoped that games like Far Cry 6 or the highly anticipated Elden Ring can give fans a little reason to keep waiting for their respective releases. In fact, works like Elden Ring or Mario + Rabbids Sparks of Hope appear on the Gamescom list of nominees for best games.

Falcon and the Winter Soldier: 5 Easter eggs of the series

Falcon and the Winter Soldier 1×3: Pictures of Baron Zemo