Home Entertainment Sea of Thieves: how to defeat the Golden Bearer 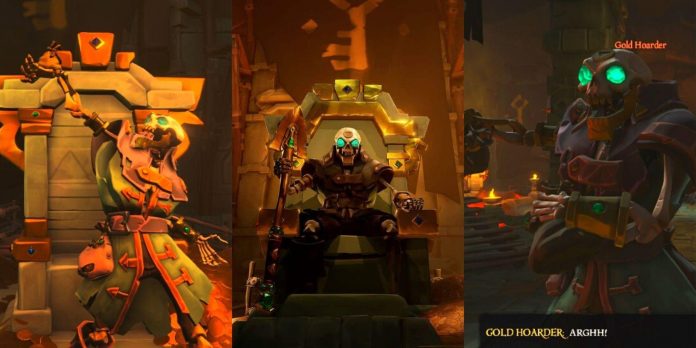 In Sea Of Thieves, the Gold Hoarder is the main boss of the ninth Tall Tale named the Shores of Gold and is a significantly challenging opponent for players in a lengthy, brow-sweating battle. The rest of the Shores of Gold Tall Tale itself is also long in duration, with a series of tricky obstacles to uncover, so it’s a venture best taken on by larger crews, but it is possible for solo-sloop sailors to complete. This article contains spoilers and focuses mainly on the battle with the Gold Hoarder rather than the variable preceding puzzle events of part 1 of the Tall Tale that lead players to the penultimate boss battle.

RELATED: Tips For Conquering The Seas Solo In Sea Of Thieves

In Sea of Thieves lore, the Gold Hoarder is known as the Founder of the Gold Hoarder’s Trading Company and is a powerful force to be reckoned with, with two veil stones for eyes and an insatiable lust for gold. For pirates up to the challenge, it’s still worth beating the Gold Hoarder, remembering the words of the Pirate Lord that it’s about the glory, not the gold. Although, the 10,000 gold reward and various Commendations are still pretty sweet to have, particularly for those who are able to achieve the Shores of Gold Curse.

Activating The Shores Of Gold Tall Tale And Part 1

To unlock the Shores of Gold Tall Tale, players must have completed The Revenge Of The Morningstar Tall Tale. When ready, players need to sail to Morrow’s Peak Outpost in The Devil’s Roar and activate the Tale next to Grace outside the tavern who gives players a journal. As players already possess The Shroudbreaker, they can now sail beyond the map to point Y3 through the blood-red Shroud, safely reaching the secret island of The Shores of Gold in one piece.

Once on the island, players need to read and decipher the puzzles in the journal to obtain 4 medallions from each of the 4 mysterious and challenging vaults to unlock and obtain the Gold Hoarder’s Coin. The coin opens the entrance to the Gold Hoarder’s lair, discovered at the base of the only giant totem figure missing a head. Here, players must navigate dangerous traps, pull levers, and fight waves of skeletons before reaching the final checkpoint outside the Gold Hoarder battle arena.

When entering the arena, players can see The Gold Hoarder sitting on a large golden throne, surrounded by beacons. As players get closer and the Gold Hoarders’ dialogue continues, the beacons fire up, and he will soon begin to attack. It’s best to attack immediately, using this time to shoot or stab him as much as possible.

RELATED: Completing Every Tall Tale In Sea Of Thieves: A Pirate’s Life Unlocks Pirates Of The Caribbean Secret

Players need to use fruit supply barrels spread out around the edges of the arena to restore health and there are ammo chests located at the bottom of the central platform stairs and in some corners. There is also a broken set of wooden stairs overlooking the arena that are useful to lure skeletons away and jump across to the other side to escape or quickly jump back into the central battle.

The Gold Hoarder himself has four main movements consisting of attacks and defensive maneuvers, but also shoots players and stabs them with a sword. The most effective strategy is to attack the Gold Hoarder at close range before running to the perimeter to stock up on supplies and restore health, repeating this process to grind down his health. His main moves are:

The Gold Hoarder throws gold coins around himself to resurrect groups of skeleton minions that attack players, serving as a distraction. The skeletons chase players around the arena and can be ignored. However, groups can inflict significant damage when close, so it’s best to avoid getting caught in the middle and destroy them when necessary.

The Gold Hoarder’s strongest attack is a powerful burst, initiated when he jumps up into the air, outstretches his arms, and then bursts coins in a forceful wave that launches players into the air and deals a devastating amount of damage to player health. Players will need to move far enough away to minimize the impact and avoid a trip to the Ferry of the Damned.

As a defensive maneuver and method of traveling around the arena to reach players, the Gold Hoarder will shunt his spade straight into the ground, disappearing into the floor and reappearing in a completely different area. This is unavoidable, so players need to keep track of where the Gold Hoarder is and either follow or reposition themselves further away according to the situation.

Although it isn’t possible to see how much health the Gold Hoarder has as he has no health bar, his health level is high, and he does take a long time to kill and tops up his health by eating fruit. Attacking him at close range as much as possible is generally the best way to make his health go down quicker and reduce the length of the battle as much as possible.

Once defeated, the Gold Hoarder drops to his knees before bursting into coins, leaving his skull on the floor for players to grab. The Pirate Lord then appears, talking more about the Gold Hoarder’s story and congratulating players on their victory before disappearing. For those pirates who enjoy taking screenshots of their in-game adventures, this is a fun opportunity to snap a picture sitting on the Gold Hoarder’s throne before leaving the arena.

Players can then follow the arena exit underneath one of the Gold Hoarder symbol flags, climb upwards to reach the waterfall exit, and return to their ships. The last task is to sail to any outpost with Galleon’s Grave being the closest and sell the Gold Hoarder’s skull to the Order of Souls for a whopping 10,000 gold. Players also unlock Commendations and rewards depending on how many accomplishments they achieve during the Tall Tale and how many times they dare to complete it.

Sea Of Thieves is available to play on PC and Xbox, and free to play on Xbox GamePass Ultimate.