Home Entertainment Sea of Thieves: how to become a captain and name your ship 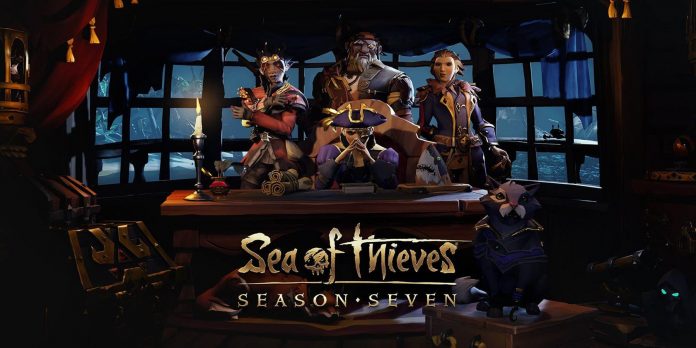 As a live service title, Rare’s popular, open world pirating game Sea of Thieves is constantly evolving. Since it’s launch back in 2018, the game has seen sweeping changes, which have not only helped improve the overall experience, but has also managed to pull in a dedicated fan base both on the Xbox and PC platforms. In fact, Sea of Thieves has even crossover over with Disney’s Pirates of the Caribbean to offer a fresh experience for those who would rather partake in a story based mode instead of against others on the open seas.

The game’s switch to a seasonal model has also proven to be a boon, letting players opt in to a Battle Pass to procure even more rewards from ship cosmetics, to currency, and other resources. While season seven was hit with an unfortunate last minute delay, it has finally launched in full and brought with it some highly requested fan features. From new seasonal rewards and a continuation of the game’s narrative, the biggest addition in Season 7 is living the life of a Ship Captain.

RELATED: 17 Tips For Conquering The Seas Solo In Sea Of Thieves

At long last, Sea of Thieves players can officially take on the role of Ship Captain by owning a ship and customizing it to their heart’s content. New logbooks, milestones, SHipwright services, and even the Sovereign faction have arrived to make the player’s transition to a fully fledged captain that much easier. Here is everything a player needs to know in order to become a fully realized ship captain.

To ascend to the role of Captain, players should select the My Ships option instead of selecting a ship type from the main menu. For first timers, the game will then display the option to purchase one of three types of ships:

Galleon – The largest vessel in Sea of Thieves, the Galleon works best for a group of four players. It’s also the most expensive at 500,000 gold. Brigantine – Smaller groups of 2-3 players will likely want the Brigantine which isn’t quite as big and is more manageable. It also comes in at 375,000 gold. Sloop – The final option is also the smallest, great for solo players or a party of two. It’ll cost 250,000 gold to get started.

It’s worth noting that while players can own 15 ships at one time, they’ll need to first progress through a particular ship’s milestones to earn a Legendary Title before another ship of the same type can be purchased. With the ship purchased, players can now give it a name and set sail.

Removing a ship from the fleet is as simple as selecting “Dismantle” before setting sail. Keep in mind that doing this removes all Milestone and Trinket progress made for that particular boat.

Now in the open world, Captains can go about decorating their ship from the usual sails, hulls, figureheads, to the actual Captain’s Cabin. Known as Ship Decorations, these options are exclusive to Captains, so even if the crew has been given permission to change ship cosmetics, the Captain’s Quarters remains off limits.

When viewing the Ship Customization Chest as a Captain, the Ship Decoration menu will be available and features tons of options for things like the Captain’s Tables, Captain’s Drapes, Captain’s Beds, Captain’s Rugs, Captain’s Chairs, Captain’s Chandeliers, and Captain’s Curtains. Some options, like the chair, chandelier, and curtains are Galleon specific, so Sloop and Brigantine captains won’t have them available. It’s also worth noting that some of these decorations can be quite expensive, so Captains should make sure they have plenty of wealth otherwise they may need to go treasure hunting.

Thankfully, purchasing decorations are not the only way to outfit a ship. Trinkets, a type of ornament or trophy, can be placed nearly anywhere on the ship. These represent a significant accomplishment made while playing the game and are unlocked from the Shipwright’s Trinket Shop. Here, players can see each one and the requirements needed to unlock them.

Under the Ship’s Log from the game’s menu, players now have a new progression system called Milestones to work through. These track the way a player plays the game and range from a wide variety of tasks from making 25 repairs on the player’s ship, longer term ones like Gold Earned as a particular faction representative, and many other activities. As a Captain, or as part of a Captained Crew, players will progress through these achievements that unlock new trophies to further customize the ship including Banners.

One of the biggest bonuses of owning a ship is that it can be fully customized and have them be saved between sessions. By interacting with the Ship Customization Chest at any outpost, a player can select “Save Item to Ship” for all future sessions until a different cosmetic is selected. However, each saved cosmetic will cost a bit of gold depending on the item with prices ranging from 2,000 to 7,000 gold pieces. For better or worse, ship damage is also retained across sessions, though for players who want to mass repair the boat can fix them by selecting “Restore My Ship” from the Shipwright at the dock.

In addition, being a Captain opens up new Voyage opportunities, with up to 100 being available to purchase at any Outpost. These can also be stored for use any time, so players don’t need to keep running to outposts to grab more.

As a Captain, a new faction called The Sovereigns can be found at the docks of Outposts where they’re more than happy to take treasure found during voyages and sell them for players free of charge. This quick sell option not only makes the offload process much faster than trying to run and find each specific representative, but it is also much safer as players don’t need to leave their ship unguarded or potentially be left open for a PVP player ambush in town. These huts also have harpoons available for an even faster treasure offload.

Sea of Thieves is available now on PC, Xbox One, and Xbox Series X/S.

A Barraca do Beijo 4: Netflix Movie will Have A Sequel?