Home Entertainment Sea of Thieves: 10 best lanterns in the rating 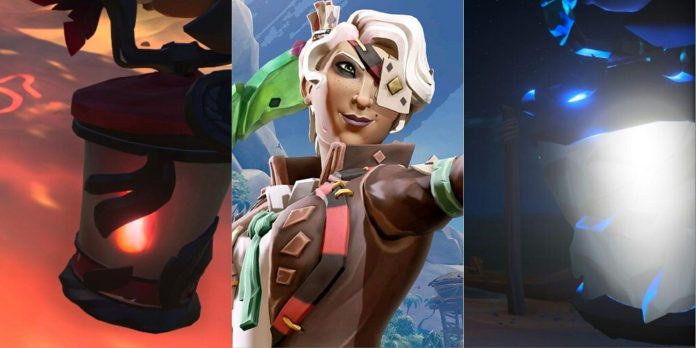 Perhaps one of the most commonly used pieces of equipment, flashlights, are needed in Sea of Thieves to illuminate dark terrain at night, illuminate lighthouses, and reveal clues such as footsteps that can be seen in ongoing puzzles and community adventures such as The Forsaken. The Hunter.” Lanterns and other equipment, such as clothing, are purely cosmetic items in the game, and they can be obtained as a reward for achieving certain praises, brought for in-game currency, or bought with ancient coins or real money in a pirate shop.

Like other cosmetic items, although lanterns offer no tactical advantages, there are undoubtedly more aesthetically appealing and outstanding, clever design features that players may prefer to show off.

Frost Lantern, which is combined with the Ice Horizon ship kit and equipment, this lantern stands out as one of the few ice items in the game and looks like a piece of ice. It can be bought in a pirate shop for real currency or 249 ancient coins.

There were other ice-themed designs in the game, such as the frozen reindeer figure in season 5 of Plunder Pass. However, it remains to be seen whether the map can evolve to include a winter landscape to explore and showcase icy cosmetics. Maybe if the Devil’s Roar freezes over.

The Wild Rose lantern can be purchased at the equipment store at any outpost for 15 doubloons. It resembles the popular “Story of the Tall Rose”, in which players helped free two pirates in love, George and Rose. The design also corresponds to the set of the Wild Rose ship, equipment and clothing items.

The lantern emits a soft, heart-warming glow and has an ornate curved design with rose decorations. This lantern also has a purple variant called the “Thriving Wild Rose Lantern”, which players can purchase from the equipment store.

8 Lantern for revealing secrets — Lantern of the fallen sea Wolf

This lantern may already be familiar to players who have followed the current Mysteries presented in the Rare roadmap for 2022. Players can still get it by going to the shelter of the Sea Dogs, finding the remains of Demarco, reading the nearest note and finding a large red shell. This then leads the players to a hidden underwater chest, inside which lies a lantern.

Not only does it look cool as the red and black version of the Glorious Sea Dog lantern, the Fallen Sea Dog lantern also helps players find clues such as hidden messages in the sand.

7 Eyes that See Everything — Kraken Lantern and its variants

Looking like the Eye of Sauron, watching every movement of players or looking out for enemies, the description of the game item of the Kraken lantern says that this is the real eye of the Kraken. Players can buy it in the equipment store for 2,650 gold coins.

6 Spectral Flames – Lantern of the Damned

This lantern is a suitable creepy companion for every trip that players can take on the Ferry of the Damned, and has a creepy green color, just like the Ghost Lantern. However, the Lantern of the Damned stands out for its medieval style, a metal cage surrounding an open flame.

For players who like their pirates to look dark, menacing or ghostly, this lantern will be an excellent choice and will certainly be suitable for ghostly howling. It will be available to buy in the equipment store as soon as the “Shadow Spectrum” reward is unlocked.

This dark and brooding lantern shines with a red light that is sure to strike fear into the hearts and souls of pirates who stumble upon it. This is a closed-mouth design compared to the Fearless Bonecrusher and Bonecrusher lanterns, which have skull heads with an open mouth and a burning flame inside.

However, perhaps this angular, gray and red design is much more intimidating. It can be purchased for an incredible 641,250 gold coins at Athena’s Fortune equipment store and is available for Pirate Legends.

The scorching breath of the dragon sitting on this bright, outstanding structure feeds the fire at the base, as if the dragon ignites the flame with its breath. This lantern is an attractive piece of equipment that players can also take with them while exploring the Devil’s Roar for any pirates willing to challenge.

The Ash Dragon Lantern can be purchased at the equipment store, and it is combined with an Oriental-style Ash Dragon ship set, clothing, and other available equipment items.