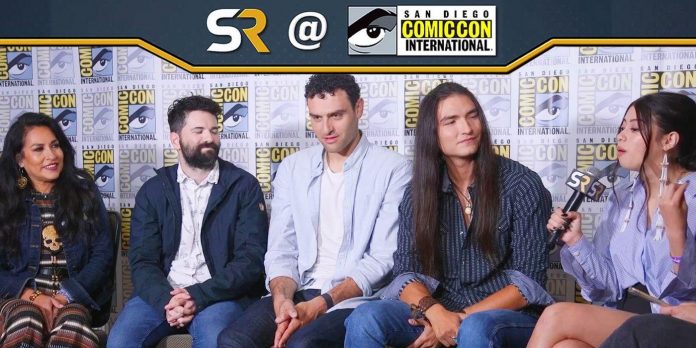 Prey is stalking its way to Hulu on August 5, which is when it will finally reveal the latest iteration of the long-lasting Predator franchise. The upcoming film takes place in the 1700s and centers on a young Comanche woman, Naru (Amber Midthunder), who fights to defend her people against the terrifying Predator (Dan DiLiegro).

Directed by Dan Trachtenberg, who won high praise for 10 Cloverfield Lane, Prey takes its representation of indigenous people seriously and breathes fresh life into the franchise with this unique setting. The film was produced Jhane Myers and also stars Dakota Beavers as Taabe.

Related: Every Predator Mask In The Franchise, Ranked

While at San Diego Comic-Con, Screen Rant spoke to Midthunder, DiLiegro, Beavers, Trachtenberg and Myers about the aspects that make Prey such a unique contribution to the Predator franchise and how long they were kept in the dark – or kept others in the dark – about the true nature of the film. Watch the video above, and read the interview in full below.

Screen Rant: What did you guys bring for us with Prey? What are we seeing?

Dane DiLiegro: What we put together over last summer is an amalgamation of hard work and determination and a lot of creativity. I can attest for everyone sitting here, we’re all excited to show everybody

Dan and Jane, what was the most exciting thing about setting a Predator movie in this time and in this setting?

Dane, you are our Predator.

Dane DiLiegro: I am. Not a good pickup line.

Dan Trachtenberg: “You don’t know me yet, but I’m the Predator.”

When you were in the look for the first time, what goes through your mind? What did that feel like?

Dane DiLiegro: It was interesting. I think the first time I got fully suited up was in front of him. We did this show-and-tell type situation, and I was in just as much shock as anyone else was. I’m looking down, and I am this entity that is non-human and ferocious and lives for the hunt. To experience that; to feel that was incredible. And right now, it’s still sinking in. It was really crazy for me.

And for it to be such a beloved franchise too, there has to be that moment where you’re like, “Wow.”

Dane DiLiegro: Dan said it 100 times, you become a child. This is a movie where you’re going back to your childhood – to, obviously, the original. Just be involved is a blessing and an honor to follow in the predatory footsteps of cinematic history.

Dakota, this is your first role.

No, you kill it in this movie. What did that feel like, stepping on set for the first time? And when you auditioned, did you have any idea that you were in a Predator movie, or was that kept from you?

Dakota Beavers: I got an email from this casting agent who had my info through happenstance. I went through several kind of tiers of auditions before I realized what it was. There was this line that said, “[click click click click click].” And I was like, “Is this a Predator movie?”

She told me it was a small part and, anyway, eventually I found that it’s the part that it is. And it blew my mind.

Not a small part.

Dakota Beavers: Like Dane said, you feel like a big kid. Getting to roll around in the dirt and ride horses and fight bad guys is like playing in the woods with your friends but getting paid for it. It’s a dream come true for me.

Dakota Beavers: It’s pretty wild, man. I just try to roll with it and learn from these guys. And they’re so great, helping me kind of know what’s happening. It’s like Crocodile Dundee and his first trip to New York. That’s me pretty much.

Who does Dane beat up the most between you two?

Dakota Beavers: Between the two? Oh, man. I mean, ever. Amber’s pretty badass. But I think Taabe gets it pretty good too. It’s pretty even, I’m sure.

Dane DiLiegro: How much can we divulge?

Between the two of you, who would you say has the most impressive scream?

Amber Midthunder: Did we ever scream in front of each other?

Dakota Beavers: No, I don’t think we ever get to scream [at each other].

Amber Midthunder: I’m trying to think. I guess there was yelling; there was a lot of yelling. But the screams were all alone in a booth. That was all like ADR; stuff like that.

Dan Trachtenberg: I will answer this. I will settle this. No offense to Dakota and Taabe, but Amber’s war cry in this movie is my favorite thing in the movie. It happens in a very unexpected place. It’s not where you think it would be. And I think it’s the most emotional part of the entire flick, so Amber wins. [Dakota has] some great screaming as well.

Amber, tell me about your character, who she is, and how you felt like you connected with this character the most?

Amber Midthunder: Naru is intensely determined, and she’s at times very stubborn. But she’s also somebody who wavers. I think the more that you believe in something that people don’t believe in, you get so attached to that thing. And then when you’re faced with it by yourself, I think it’s a relatable thing to feel scared or to feel doubt.

I think that makes her really interesting, especially inside of a world that is so large and fantastic – like the Predator sphere, or like the 1700s. I feel like those are two places where you so rarely see characters that you can relate to on that level. And that’s before I knew that this was a Predator film or anything about it. That was what I found my easiest way in with her. Because, to me, she was just so textured and real.

At what point did you find out it was a Predator film?

Amber Midthunder: The first time I auditioned with Dan was, like, February of 2020. And then it disappeared, because of COVID and all this stuff. Then I came back later and re-engaged in the audition process. So, really, by the time I found out, it was maybe a year and a half after my initial audition.

Dan and Jhane, was there ever talk about keeping the Predator reveal a secret?

Dan Trachtenberg: Yeah, the initial intention was [that]. Because we started developing this when 2018’s The Predator movie was still prepping – or maybe it was in production. My pitch to the studio was, “What if we put out a trailer that is just the first act of this movie? That is just the story of this Comanche girl who sets out to prove herself and ends up in the woods, and then sees a fire in the sky?” And that would be it. It wouldn’t have a title, or it would have a fake title or something.

And then when that last Predator movie came out, we would attach the full trailer. And that would include the bear sequence, where the bear is lifted up and the blood drips down and reveals the Predator. And then you would know, “Oh, this is a Predator movie.”

Certainly, it would have been amazing if we could have kept it secret the whole time and the movie announced itself while you’re watching it. But I think that’s a little less realistic, so I thought maybe marketing could have done that trick.

I think there will be a lot of people that are surprised by it, which will be awesome.

Dan Trachtenberg: Surely the title helps that a little bit.

Being set in 1719, we know that Predator has been coming to earth for centuries at this point. Are there any other eras that you would love to tackle or see Predator in?

Dan Trachtenberg: I’ll let some of these guys answer that. Just because if I answer that, it may lead to [speculation].

Dane DiLiegro: I would love to see Predator battle some Samurai. That would be pretty cool. That’s a cool era; that’s cool armor, and there’s a high ceiling for artistic opportunity there I think.

Dan Trachtenberg: There’s a lot of Kurosawa-esque bits in this movie as well, though. But that’s a cool place.

Dakota Beavers: Samurai would be deadly. Ancient Rome would be cool. It’d be cool to see [Gladiators].

A skilled Comanche warrior protects her tribe from a highly evolved alien predator that hunts humans for sport, fighting against wilderness, dangerous colonizers and this mysterious creature to keep her people safe.

Check out our other SDCC 2022 interviews with the casts of Dungeons & Dragons and Lord of the Rings: The Rings of Power as well. You can also catch our previous interview with Prey’s Dan Trachtenberg & Jhane Myers.