Home Tech A Screen Shot Reveals That Xiaomi Mi MIX 4 Will Come With... 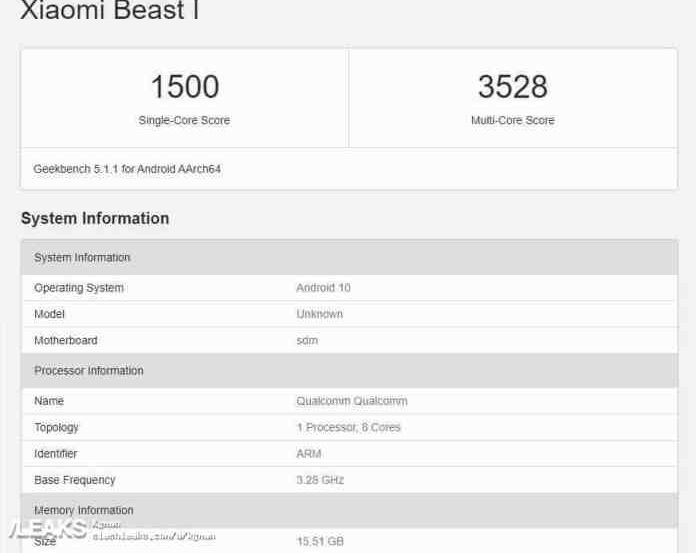 A screenshot has emerged showing that the next flagship series of Xiaomi, one of the most formidable smartphone manufacturers of recent times, will come with 16 GB of RAM. The device, which is displayed in the screenshot as ‘Xiaomi Beast I’, is thought to belong to the Mi MIX 4 family.

Recently, Redmi General Manager Liu Weibing has confirmed that the upcoming Redmi K30 Pro will not ‘offer better features’ than the Xiaomi Mi 10 series. This means that the next flagship family of the Chinese company will be the Mi MIX 4 series. We can say that a recent post on Mi MIX 4 in Weibo, China’s social media sites, has strengthened these claims.

A mysterious phone, thought to be the Xiaomi Mi MIX 4, appeared in Geekbench with 16 GB of RAM:
Although the newest member of the Mi MIX series, which has been silent for a long time, has not been released yet, we are learning something new about the phone every day. At this point, the smartphone, which appeared in Geekbench 5.1.1 with the Snapdragon 865+ chip, managed to get 922 points from single core tests and 3,320 points from multiple core tests.

Now a mysterious Xiaomi smartphone has been displayed in another Geekbench listing with the name ‘Xiaomi Beast I’. The most striking part of this device, which is thought to belong to the Mi MIX 4 family, is that it has 16 GB of RAM.

For now, we do not know if the new smartphone that appeared in Geekbench really belongs to the Mi MIX 4 family. We will only be able to see if these claims are true or not in the coming days, when an official statement is made from the company. Stay informed to be aware of all the developments in this process.