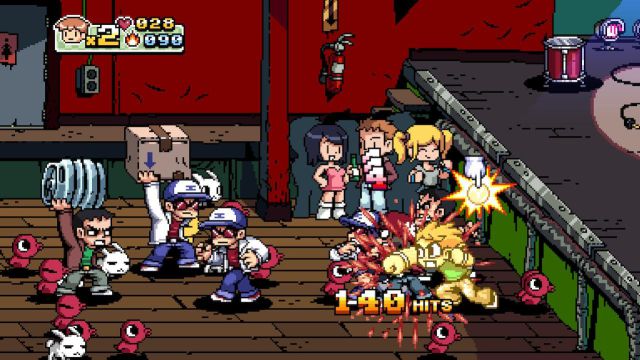 The return of a cult game. After being missing in action for six years, Scott Pilgrim’s video game is released again. Ramona, it’s coming for you.

We weren’t discussing Tenet, but about Interstellar. Andrew Garfield was still Spider-Man and Marvel was still with Captain America: The Winter Soldier. We did not know who Rosalía and C. Tangana were, and it was a few years before we started the car radio to not hear Des-pa-cito for the fifty-hundredth time. Atleti had just won the League (Ole, ole, ole …), Madrid raised their long-awaited tenth and Germany concealed a 7-1 against Brazil in Belo Horizonte. In video games, consoles suffered from personality disorder. Wii U believed itself to be successful and Xbox One was thought to be a television. Terms like battle royale, crunch and review bombing sounded like Chinese to us. We laughed when Bungie said that Destiny would last ten years and we looked forward to the arrival of The Witcher 3: Wild Hunt believing that CD Projekt would become Rockstar Games one day. It was a time of acquisitions. Amazon bought Twitch, Facebook bought Oculus and Microsoft bet everything on Minecraft. Kojima was still at Konami, Sony still called PlayStation VR Project Morpheus, and Dragon Age: Inquisition was named Game of the Year at The Game Awards. That’s how things were in 2014, a year that is also known as the one in which Scott Pilgrim vs. The World: The Game disappeared from the face of the earth. Well, perhaps the latter is a bit dramatic to put it, but the game was volatilized from major digital platforms and was no longer available for purchase. There was no way to get a copy. The last push it needed to establish itself as a cult game. Since then, fans have spent six long years nagging Ubisoft and Bryan Lee O’Malley to bring him back. Six years in which, as we have seen, the world has changed a lot. However, now that it is finally back and we have had it in our hands, it is clear to us that there are two things that have not changed, nor will they change. The first is our fervor for all things Scott Pilgrim, Ramona Flowers and the Sex Bob-Ombs. The second, that Scott Pilgrim vs. The World: The Game is still a beat ’em up gem.

See Also
Scott Pilgrim, the power of love and beat'em up

Scott Pilgrim vs. The World: The Game – Complete Edition is exactly the same game that we enjoyed in 2010, when it was released taking advantage of the pull of the wonderful (we repeat, wonderful) Edgar Wright movie. The only difference is that it now includes two DLC packs that the original received between 2010 and 2013 as standard. The first of them was released coinciding with the release of the film on DVD and Blu-Ray. It brought with it a new playable character (Knives Chau) and two new game modes (Dodgeball and Total Battle). For its part, the second pack was made to beg for more than three years, but at least it served to correct the great problem of the title: the lack of online. That second DLC brought matchmaking and also allowed us to handle Wallace Wells, Scott’s roommate. Now all those characters, modes and online multiplayer are available from the beginning, and to them are added the relevant graphical improvements in terms of resolution, framerate and load times.

YouTube Changed the Design of Video Page in Android and iOS...