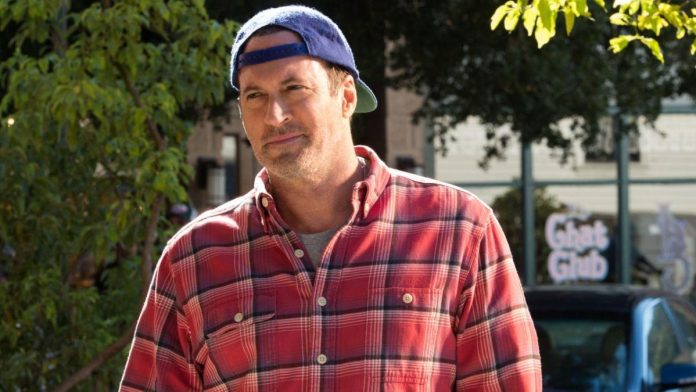 Gilmore Girls should be one of the most enjoyable TV shows of all time, right? Quick jokes between Lorelai and Rory, the quirkiness of Star Hollow, the passionate arguments of Dean’s team/Jess’s teams/Logan’s Teams. However, nothing is ever perfect, and Scott Patterson, who masterfully played the owner of the diner Luke Danes in seven seasons of the series and the Netflix miniseries, really felt objectified during one scene of the third season, which, in his opinion, is still “infuriating.”

In his podcast I Am All In, Scott Patterson discussed the episode “Keg! Maximum!” which included a scene in which Luke was lying on his stomach on the ground, helping Lorelai (Lauren Graham) and Sookie (Melissa McCarthy, whose career began after “Gilmore Girls”) with the renovation of their hotel “Dragonfly”. The women commented on his ass, and even after he told them to shut up, Lorelai continued to joke and compliment his ass.

Watching the episode, apparently, caused Patterson a lot of suppressed emotions, he remembered how uncomfortable it was for him to act in this scene. He remembered:

I realized it wasn’t normal and it didn’t make me feel comfortable. It made me feel very embarrassed, actually. It’s infuriating to be treated this way — it’s infuriating — because you’re being treated like an object. It’s disturbing and disgusting, and I had to endure it throughout this whole scene and a lot of takes. It was all about ass, ass, ass, ass. When we weren’t filming, we were sitting — people were still talking about ass, ass, ass. It was the most anxious time I’ve ever spent on set, and I couldn’t wait for this day to be over.

Regardless of whether the characters’ behavior was appropriate (it wasn’t), Scott Patterson’s body and his ass were still the topic of conversation in the scene he had to play while reading at the table, then rehearsals and for a few takes on set. And he noted that conversations about his ass continued among the cast and crew even after the cameras stopped rolling.

He elaborated on this in a podcast, admitting that he was so uncomfortable with his character being reduced in such a way that he wondered why he was participating in the show. Scott Patterson also said he never talked about his feelings, which angered him even more. He continued:

It is just as disgusting for a woman to objectify a man as it is for a man to objectify a woman, and it is just as harmful. … The fact that it was 2003 does not mean that everything was fine. It’s never normal, and I didn’t feel comfortable doing it, and it infuriated me. And I never said anything, so I was angry at myself for not saying anything. But I had this job, and I didn’t want to make a fuss and all that.

It’s true that times have changed—and it’s hard to believe that this scene would have happened if the show had been made today —but that doesn’t mean it was OK to do it then either. Although he said he had dealt with it (but then laughed and said that obviously he hadn’t dealt with it yet), he thought that this scene not only reduced Luke’s character to a body part, but also minimized the characters of Lorelai and Sookie. .

I’m sure that as uncomfortable as it was to shoot this scene, it’s not a walk in the park to talk about it in a podcast and talk about why such objectification bothered Scott Patterson. However, it is important to talk about these things in order to avoid similar situations on modern televisions.

If you want to relive some of the most enjoyable moments from “Star Hollow,” all seven seasons of “Gilmore Girls” and the four-part miniseries are available for streaming with a Netflix subscription. You can also watch some of the other best shows that Netflix has to offer.

Mariska Hargitay talked about the relationship between agents Olivia and Elliot