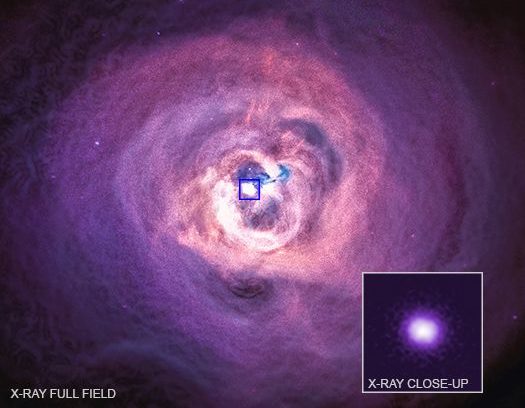 Scientists are watching distant galaxies with the X-ray telescope to obtain evidence of axions from the basics of string theory, which has long been controversial in the scientific world.

The Standard Model of Particle Physics is quite sufficient to explain the universe on nanoscale. However, when the problem of understanding the universe arises in macro scales, the Standard Model is insufficient. Albert Einstein’s general theory of relativity has proven to be a solid theory when it comes to planets, stars and galaxies. However, the general relativity theory against quantum scales remains insufficient.

Scientists have been thinking about a theory that can combine these two theories for a long time and they are working on them. In fact, this Theory of Everything research marked the final stages of the lives of scientists such as Albert Einstein and Stephen Hawking.

The most ambitious theory about the Theory of Everything was string theory. String theory is based on the assumption that subatomic particles, which are briefly described as “zero-dimensional dots” in the classical approach, can actually be one-dimensional and threadlike entities.

In the Perseus cluster with the telescope at the Chandra X-Ray Observatory, particles called hypothetical axion, which constitute the basis of string theory, were thought to look like threads. If there are really axion particles in the Perseus cluster, they will create disruptions in X-ray energy as the particles turn into photons.

David Marsh, one of the authors of the published article about the results of the study, said, “Looking for huge structures such as galaxy clusters, small particles such as axions, is actually great places to look for axions. Galaxy clusters also include magnetic fields at huge distances and often bright X-ray sources. This feature increases the chances of the transformation of axion-like particles to be detected. ”

Unfortunately, this was not the case. In the data obtained for 5 days, nothing to show the presence of axions was found. Despite this, the researchers say that axions can have higher masses, or therefore will not easily turn into photons.

Helen Russell, one of the researchers, added that her work does not ignore axions but does not help reveal information about these particles.

The search for the axions of scientists from NASA is not the first study in this field. Previously, neutron spin effects on the electromagnetic oscillations in the plasma chambers and the formation of magnetic fields in places that should not normally have been tried to be determined.