You must remember the first – and superfamous – “photo” of a black hole, right? The image, released last year, was created from the processing of a colossal amount of data, since, in reality, it is impossible to “photograph” these regions of space, since they not only emit no light, but capture including luminous particles (or anything else) that get too close to them. Because the latest feat involving black holes was released this week and consists of a sequence showing a black hole spitting jets of energy into space!

Where are the modes?
The black hole in the images is supermassive and is 5 billion light years away, in the heart of the Virgo Constellation. Named 3C 279, this cosmic monster is right at the core of a quasar, that is, an incredibly bright “quasi-stellar” cosmic object that contains an accretion disk – or a diffuse cloud of material – rotating around a body which, in this case, is the black hole. 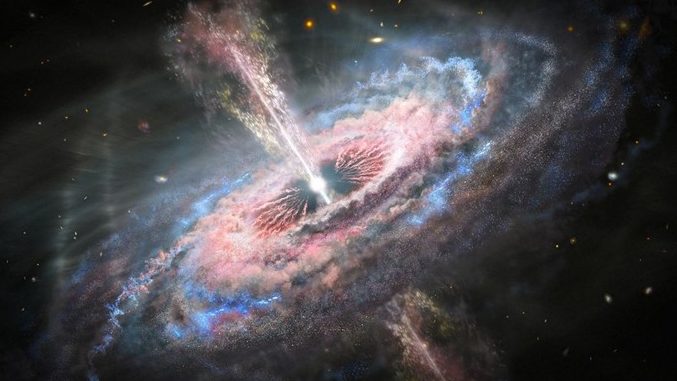 And the 3C 279 doesn’t have many modes, because, following images, it can be seen spitting particles into space. The truth is that these are energetic jets that are being expelled through the black hole at almost the speed of light – due to the extraordinary forces involved in this fascinating cosmic structure.

Jets
The sequence was created from the same observations that culminated in the creation of the iconic “photo” of the black hole – conducted by scientists in charge of an initiative called Event Horizon Telescope. It consists of a selection of images captured over 1 week using a technique called Long Baseline Interferometry, in which observations are made in a synchronized manner by radio telescopes around the world. Basically, this network of observatories converts our planet into a kind of giant virtual telescope capable of “seeing” far, far away.

To have an idea, to focus on the black hole – which is billions of light years away, remember? -, the researchers needed to analyze a small piece of the cosmos equivalent to 20 micro arc seconds. In other words, it would be as if someone here on Earth could see an orange thrown on the surface of the Moon. Watch the sequence:

The combination of the data and the analysis of the information collected by the radio telescopes, in addition to allowing scientists to generate the images you just saw above, also revealed that the jets of particles expelled through the black hole have a very peculiar shape and twist at the base , which surprised the team a lot. But the expectation is that many other cosmic surprises will not take long to be released, since scientists continue to search every corner of the Universe in search of news!

What happens if astronauts get sick in space?