Scientists from Portugal conducted a study on the problem of not returning to the same starting point in running n-body simulations backwards. The researchers found that in the n-body simulation with three objects, the time symmetry was disrupted.

Most laws of physics do not care about moving time backwards or forwards in theoretical studies. The laws of physics work the same way, whether time is moved forward or backward. This is called time symmetry. However, when we come to the real universe, things are different.

A team of scientists, led by Tjarda Boekholt from the University of Aveiro in Portugal, observed that three objects acting with each other’s gravity distorted the symmetry of time, albeit for a very short moment.

In the article in which the study is explained, “The quantitative relationship between the chaos in star dynamics systems and the irreversibility of time has been uncertain until now. In this study, we examine chaotic three-body systems in free fall, using the correct and precise n-body code Brutus, which goes beyond the standard double precision arithmetic. ”

The N-body problem is one of the famous problems of astrophysics. N-body problem occurs when more objects are added to a system that interacts with the gravitational effect. To explain the N-body problem, we can look at a simple example of Newtonian physics.

According to Newton’s laws of motion and Newton’s law of gravitation, the movements of two bodies moving in orbit around a central point can be mathematically estimated. However, when another object is added to the system, things become difficult. Objects begin to distort each other’s trajectories under the influence of gravity and add an element of chaos to the system. This interaction with Newtonian physics or general relativity theory cannot be fully explained under a single formula.

We can only estimate the movement of the Solar System, which we understand many features very well, for only a few million years. Chaos does not allow to guess more. Therefore, scientists think that chaos in the universe is not a mistake, but a feature. 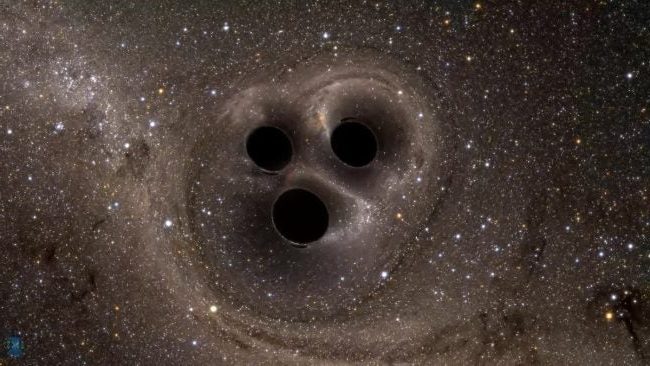 Tjarda Boekholt and his team from Aveiro University prepared a new test to eliminate this uncertainty. Simon Portegies Zwart from Boekholt and Leiden University had written an n-body simulation code called Brutus to prevent numerical computational errors in such operations. Scientists used Brutus to test the time symmetry of a system with three objects.

When both tests were done, scientists found that simulation could not be undone in 5 percent of the trials. The researchers determined that this was due to a difference in value as small as the Plack constant.

Tjarda Boekholt said, “The movement of the three black holes has shown that even something as small as the Planck’s constant can cause a chaotic result to affect the movements. “The size of the Planck constant has an exponential effect and breaks the time symmetry.”

5 percent may not seem like a very large proportion. However, since it would not be known which of the simulations would be within five percent, the researchers concluded that n-body simulations were basically unpredictable.

In this way, they made sure that the problem was not caused by a problem in the simulations that the n-object simulations did not return to the original starting point when the run was run backwards.

“Being unable to turn back time is not just a mathematical argument anymore, it is something hidden in the basic laws of nature,” said researcher Simon Portegies Zwart. “Three-body systems made up of planets or black holes can never escape the advancement of time.”