Home Entertainment School of Good and Evil: 6 Things We Know about the Netflix... 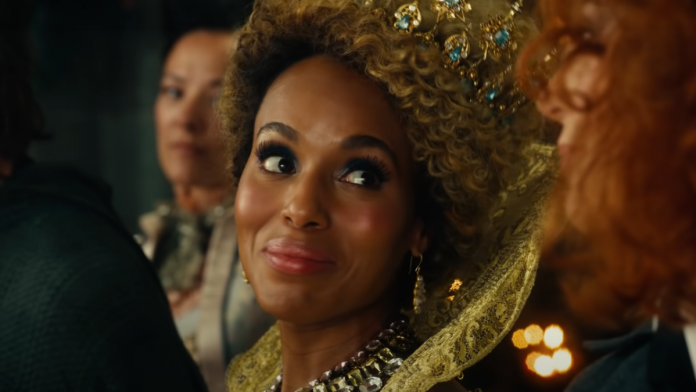 Book adaptations of big-time novels always seem to go over well with audiences, and have for plenty of years, with movie sagas such as Harry Potter and Lord of the Rings taking over the box office. But, a newcomer is arriving on the movie scene, one which should have been adapted almost as soon as it came out, if you ask me.

The School for Good and Evil, an amazing addition to the fantasy genre, is finally getting its own adaptation into the film world – but not in theaters. However, it will be appearing as a Netflix movie, on the popular streaming website. However, what else do we know about this upcoming film? What is it going to be about? Who is going to be in it? There are plenty of things that you might not know, but we do. Here are some quick things we know about the upcoming Netflix film.

Talk about a great addition to all the fun Halloween movies we’ll be watching during that time of year – I can always use a little good and evil in my life.

The School For Good And Evil Has A Star-Studded Cast

With an adaptation like The School for Good and Evil, we all knew that the cast needed to be amazing. And, luckily, there’s no shortage of amazing additions to this Netflix movie. First, let’s take a look at the two leads characters of the film, Sophie and Agatha, where the story begins. These two roles will be played by Sophia Anna Caruso, known for her role in the Broadway musical Beetlejuice, and Sofia Wylie, who stars on a Disney+  show you really should watch, High School Musical: The Musical: The Series.

Wylie is especially excited for her role in The School for Good and Evil. In an interview with MTV, she talked about her part as Agatha and how she’s excited to “bring some realness” to the character that hadn’t been seen before. She described Agatha’s struggles with internal and external beauty through her own experience, saying that it’s something she can relate to and that it’s an important message to teach.

That’s something that I personally can really relate to, that voice inside of your head, how much power it has. I deal with those doubts and those insecurities. And I think I can really bring some realness to Agatha in that sense because I know, as a teenage girl, it can be very difficult to overcome that voice.

Adding on to this cast, Deadline reported that two megastars, Charlize Theron and Kerry Washington, signed on for two of the main roles in the upcoming film. Theron is set to play Lady Lesso, and Washington will portray a teacher at the school, Professor Dovey.

In addition to these two, in another article, Deadline reported that Laurence Fishburne, known for his roles in The Matrix trilogy and many other films, as well as action star Michelle Yeoh, from movies such as Crouching Tiger, Hidden Dragon, Everything Everywhere All At Once, Crazy Rich Asians, and her TV role in Star Trek: Discovery, have stepped up to be in The School for Good and Evil. Fishburne will play the Schoolmaster – a role that sounds quite fitting for someone of his talents, and Yeoh will portray another teacher, Professor Anemone.

Also for the film, Demi Isaac Oviawe, Kaitlyn Akinpelumi, and Freya Theodora Parks will play Anadil, Dot and Hester, three young women who are a part of The Coven in The School for Good and Evil, as confirmed by a behind-the-scenes look with the author of the original novel, Soman Chainani on YouTube.

Already, this film is shaping up to be filled to the brim with some of the Hollywood elite. I, for one, can’t wait to see what they do with the material they are given, because it’s about to get magical.

For those who don’t know, The School for Good and Evil is composed of several novels in a series. Netflix confirmed that this new movie will be based on the series by Soman Chainani, and from the premise of the film, it’s looking to be exactly like the first novel.

As confirmed by the description from the trailer for the new movie on YouTube, The School for Good and Evil is going to follow two best friends, Sophia and Agatha, who are swept into a world of trying to balance both good and evil when they are given different roles, but this in turn causes their lives to turn upside down.

I’m already on board for a story like this. Two opposing personalities who end up being trained in styles that they thought they weren’t aligned with? Thrown into unlikely situations? Fantasy elements? My god, I can almost feel the franchise coming. Netflix has a great addition with this one.

I don’t think there could have been another perfect choice for the director for The School for Good and Evil than Paul Feig. The legendary director has produced some of the biggest comedic hits in the last ten years. For example, Feig directed the smash-hit Bridesmaids back in 2011, the 2016 remake of Ghostbusters, the Emilia Clarke Christmas comedy Last Christmas, the comedy thriller, A Simple Favor, and so many others.

Besides movies, Paul Feig has also directed multiple episodes of several incredible sitcoms, such as The Office, Arrested Development, Parks and Recreation, and 30 Rock. The School for Good and Evil novels have an amazing comedic element to them, and I can only imagine what a comedic director like Paul Feig will bring to the table in this new film.

When it comes to an adapted screenplay, you always have to make sure that you find the right person to do it, because with novels, there are so many details that need to somehow make it into the movie. The School for Good and Evil found its screenwriter in David Magee.

Magee is a perfect choice, because not only has he been around the business for some time, he’s had plenty of experience in writing fantasy, working on films such as the Academy-Award winning Life of Pi, the Disney sequel Mary Poppins Returns, and wrote the screenplay for Finding Neverland, the story of the author who created the legendary character, Peter Pan. Truly, he has great experience up his sleeves, and I’m eager to see what he’ll do with the fantastic story that is The School for Good and Evil.

The School For Good And Evil Has Finished Filming

As you can expect for a film that already has a trailer, The School for Good and Evil finished production for their film not too long ago. From a tweet on Twitter from Netflix Geeked, it was confirmed back in July of 2021 that filming had wrapped on the film and was entering into the post-production phases.

Watch The Trailer For The School For Good And Evil

If you haven’t yet seen the trailer for The School for Good and Evil, be sure to watch it now, as you won’t want to miss out on the magic.

With an amazing cast, awesome story, and some really cool looking set pieces featured in the trailer, The School for Good and Evil is looking to be an amazing addition to Netflix’s original film line-up. I can’t wait for this movie to pop up as part of the 2022 Netflix movie schedule. I’m practically counting down the days.