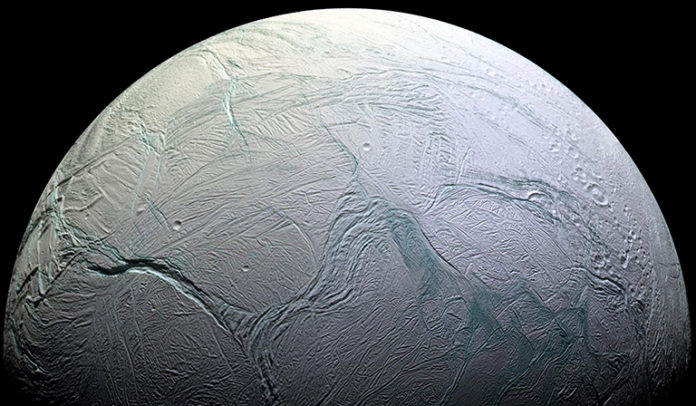 Saturn’s satellite, Enceladus, had a very curious texture for scientists. The source of the ‘tiger lines’ on the surface of the satellite was not known, but the mystery was solved with the latest research.

A mystery that has attracted scientists’ interest since NASA’s Cassini spacecraft was imaged has finally solved it. The “tiger lines” in Saturn’s satellite Enceladus were finally understood.

Scientists, along with data from Cassini, had found a frozen subsurface ocean in Enceladus, but it was unclear what these signs resemble tiger lines appearing on the satellite. These lines were nothing like the solar system.

The researchers discovered what caused the cracks:
The tiger lines were 35 kilometers away from each other and were positioned in parallel. The length of each line was about 130 kilometers. The most interesting point of these lines was not the shapes, but the spray of ice water. In a recent study, Doug Hemingway, Max Rudolph of the University of California and Michael Manga tried to find the origin of this event.

Saturn’s satellite, Enceladus, is not frozen. The reason for this is that the satellite’s orbit around Saturn is rather strange. The trajectory followed by Enceladus changes the gravity on the satellite. Part of the mystery is solved by the trajectory of Enceladus.

Why are the cracks parallel?
One aim of the study was to find out why these lines are parallel to each other. The team’s research revealed the answer to this question. According to the research, the cause of this event, the first slot was not closed after the opening. So the ocean beneath the surface came out to the surface.

After the ocean surfaced on the surface of Enceladus, three parallel cracks were formed. The waters from the first crack formed ice on the edge of the crack. As a result, the weight on the surface caused other cracks to occur.

In the study conducted with the models, it was also discovered that the cracks remained open. It was found that these cracks continued to erupt partly due to the changing tidal effects associated with the strange trajectory followed by Enceladus. As the cracks are constantly expanding and narrowing, the ocean continues to rise to the surface. Therefore, these cracks are not expected to close completely.