Home Entertainment Saturn’s Distinctive Appearance May be Linked to the Death of the ancient... 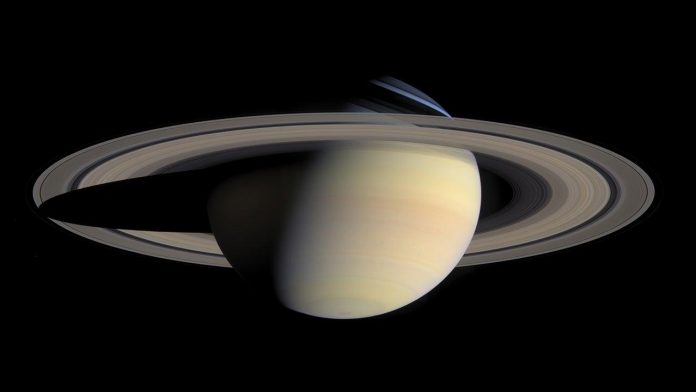 According to the results of a new study, Saturn may owe its wide ring system and the characteristic tilt of the death of an ancient moon named Chrysalis.

The gas giant Saturn is one of the most spectacular sights in our Solar System. However, despite the fact that it has been the target of several ambitious missions in the past, serious questions remain as to how the iconic planet acquired its impressive ring system and why exactly its orbit is tilted by 26.7 degrees relative to the plane of its orbit.

Astronomers for some time believed that Saturn’s sharp tilt angle was the result of the gravitational interaction between the gas giant, its 83 moons and the attraction exerted on it by the planet Neptune. The connection with the latter was established when astronomers realized that the motion of Saturn, similar to a spinning top, very well corresponds to the orbital rhythm of Neptune.

In other words, the two massive planets were thought to have a strong gravitational bond, also known as resonance.

Data collected by the Cassini spacecraft, which explored the Saturn system between June 2004 and September 2017, confirmed this relationship, showing that the massive moon Titan was moving away from Saturn at an amazing rate of 11 cm per year.

This has led some scientists to suggest that the gravitational influence and external motion of this natural satellite, which is significantly larger than Earth’s moon, were probably responsible for maintaining the orbital resonance between Saturn and Neptune.

However, this theory was based on one important and largely uncertain characteristic of Saturn — its “moment of inertia”. In fact, it is a term used to describe the distribution of mass inside a celestial body.

The moment of inertia is an important factor for astronomers seeking to understand the orbital properties of the world, since the distribution and density of mass inside a planet can have a significant impact on its inclination. Therefore, if scientists do not have a good idea of the moment of inertia, it becomes more difficult to find out exactly what the history of this planet is, for example, using computer modeling.

Now, a team of researchers has used Cassini data from the final part of its mission, known as the Grand Finale, to refine Saturn’s moment of inertia and found that it is outside the range needed to maintain orbital resonance with Neptune.

During the Grand Finale, Cassini was ordered to make a series of daring dives between the surface of Saturn’s clouds and its inner rings. In total, 22 dives were made, during which the spacecraft collected data on the internal structure of Saturn and the distribution of mass in it.

The team used computer simulations to create a map of Saturn’s mass distribution that would match Cassini’s gravitational measurements in the real world. While it was close, the team’s results showed that the attraction of Titan is not enough to maintain the gravitational resonance between Saturn and Neptune. However, judging by the current tilt of Saturn, the team believes that in the past there was a resonance lasting billions of years, which was subsequently disrupted.

To solve the mystery, the team began running computer simulations that essentially turned back time on Saturn’s planetary evolution in an attempt to detect gravitational instability that could explain the break with Neptune.

After conducting numerous simulations, the team concluded that Saturn once had at least one other large satellite about the size of the moon Iapetus, which currently has a diameter of 457 miles (736 km).

Death of the Moon

According to a study published in the journal Science, the gravitational influence of this long-dead moon maintained a fragile resonance between Saturn and Neptune. For several billion years, this gravitational dance between gas giants and moons had to slowly pull Saturn’s axis to its extreme tilt.

However, the relationship was not destined to last. The team estimates that about 160 million years ago, the Moon collided with the gravitational influence of its siblings Titan and Iapetus and was forced to approach the surface of Saturn.

In the end, Chrysalis would have been torn apart by the enormous forces acting on it. A huge part of the moon’s mass would disappear under Saturn’s cloudy surface. However, a small number escaped this fate and eventually settled around the equator.

With the destruction of the Moon, the finely balanced resonance was disrupted, leaving Saturn with the characteristic tilt of the orbit and the makings of the fantastic ring system that we see today.

Anthony Wood is an independent science columnist for IGN.

A space tenderloin! Guardians of the Galaxy will also include Cosmo...