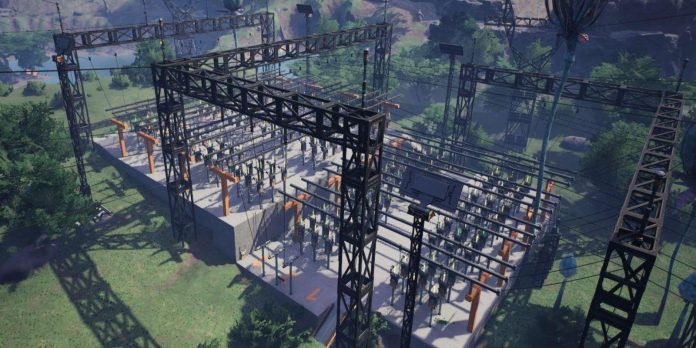 Setting up a power grid is an essential part of progressing in Satisfactory because many of the buildings require an energy source. Generators can be used to produce power, and Power Poles, Power Lines, Train Stations, and Railways can be used to transfer it. While setting up a power grid may seem relatively simple, failing to optimize efficiency or exceeding the production limit can cause issues like power trips.

Items that generate or transfer power are unlocked in different tiers and become available as milestones are completed. Milestones are the main story progression method, and completing them involves delivering resources to the HUB Terminal. Objects placed in the HUB Terminal can’t be recovered. Tier Zero will be unlocked in Satisfactory automatically at the start of the game, and completing the associated milestones unlocks Tiers One and Two. From there, players need to work on constructing the Space Elevator to unlock additional tiers.

Related: Satisfactory: How to Setup (& Run) a Dedicated Server

Unlocking higher tiers will make it easier to set up an efficient and reliable power grid. The type of generator being used will determine what fuel source is needed, so players can decide which power producer is best for them. Ideally, players will use a generator that takes a fuel source they can farm for nearby. After getting the generators and power transferring equipment set up, Power Storage units and Power Switches should be added as well.

How To Use Generators With Different Fuel Sources In Satisfactory

There are five different types of generators, but they’re all unlocked at different tiers. The Geothermal Generator, and the fuel source that it requires, need to be unlocked via the Caterium Research chain in the Molecular Analysis Machine. Generators operate at different efficiencies in Satisfactory depending on the machine and available fuel. Each generator runs at full capacity, which can charge Power Storage units, except for the Biomass Burner. This particular generator is eco-friendly and will only operate to produce the energy that’s needed to keep everything running. So, if a grid doesn’t require the full 30 MW that a Biomass Burner produces, it will generate less power. The Biomass Burner can’t be used to store energy in a Power Storage unit.

Biomass Burner (Tier 0): The Biomass Burner requires 15 Iron Plates, 15 Iron Rods, and 25 Wires to build. It can use Leaves, Flower Petals, Wood, Mycelia, Biomass, Solid Biofuel, Packaged Liquid Biofuel, Alien Carapace, Alien Organs, or Fabric as fuel, and the maximum power production is 30 MW.Coal Generator (Tier 3): To build Satisfactory’s Coal Generator, 20 Reinforced Iron Plates, 10 Rotors, and 30 Cables are needed. Coal, Compacted Coal, or Petroleum Coke plus Water are used to fuel a Coal Generator, and its production power is 75 MW.Geothermal Generator (Caterium Research): Geothermal Generators can be built using eight Supercomputers, 16 Heavy Module Frames, 16 High-Speed Connectors, 40 Copper Sheets, and 80 Rubber. Unlike other generators, the Geothermal Generator doesn’t use traditional types of fuel, but it needs to be built on top of a Geyser. The energy output will be between 50 MW and 600 MW depending on the Geyser.Fuel Generator (Tier 6): A Fuel Generator is built using five Computers, 10 Heavy Module Frames, 15 Motors, 50 Rubber, and 50 Quickwires. This generator has a power production rate of 150 MW, and it uses Fuel, Liquid Biofuel, or Turbofuel.Nuclear Power Plant (Tier 8): The resources required in Satisfactory for the Nuclear Power Plant are 250 Concrete, 25 Heavy Modular Frames, five Supercomputers, 100 Cables, and 100 Alclad Aluminum Sheets. The Nuclear Power Plant uses Uranium Fuel Rods or Plutonium Fuel Rods, and its power production is 2,500 MW.

How To Use Overclocking & Underclocking For A Power Grid In Satisfactory

How To Avoid Or Fix Power Trips In Satisfactory

Players should try to avoid a power trip at all costs because it will completely shut down production for everything connected to the grid. This means that all of the buildings, machines, generators, and anything else that power is used for in Satisfactory will be shut down until the power production matches or exceeds the power consumption of all connected machines or buildings. When a power trip occurs, the sound can be heard no matter how far away players are. When the sound effect is heard, players should return to their power grid as soon as possible to avoid any delays in production.

To avoid a power trip, players need to keep an eye on how much power they’re using versus how much is being produced. Power Storage units can also be connected early on so that if consumption gets too high, the reserves will be used automatically. However, if a power trip does occur, there are ways to fix a broken power grid in Satisfactory. Power Switches can be used to split a power grid, or players can selectively disconnect certain buildings to bring the power consumption down.

How To Use Power Storage In Satisfactory

Power Storage can be used to avoid power trips, and having multiple units to hold any excess power increases the efficiency of the grid. Each Power Storage unit can hold a maximum of 100 MW for one hour. It takes one hour in real-time to fully charge a Power Storage unit that’s empty, but it can take longer if the maximum amount of spare power doesn’t satisfy the number of Power Storage devices connected to the grid.

The bet: Martin Scorsese and Leonardo DiCaprio will reunite for the...