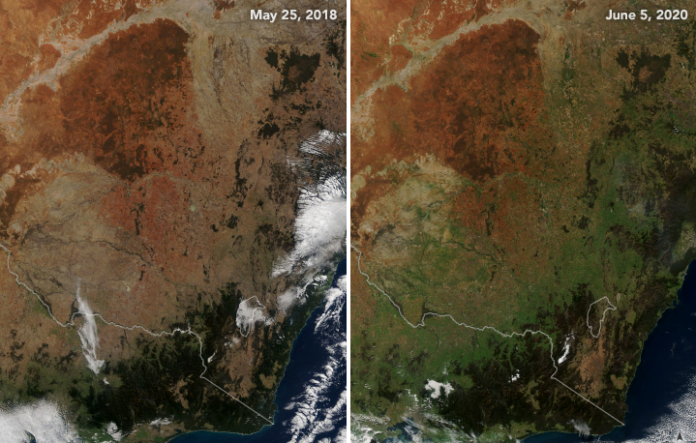 In Southeastern Australia, which has been experiencing a drought for 34 months, rains this year caused the vegetation in the province to be concentrated again as in the old days. Photos taken from NASA’s Aqua satellite show that the state is greener than in previous years.

The record temperatures in the summer of 2019-2020 in New South Wales, the state of Southeastern Australia, which has been under the influence of high temperatures and low precipitation for years, made us think that the severe drought in the region will enter the third year.

High temperatures lasting for three years and the lowest rain level of the century affected the vegetation of the region negatively. In New South Wales, agricultural lands and lakes have dried up due to a three-year drought, and millions of fish in the lakes have been destroyed by drought.

After 34 months of drought, rain finally started in the province. Even rains in the state between January and May 2020 were far above the Australian average. According to the statement from the Australian Meteorological Bureau (BOM), the average rainfall has been approached and exceeded for the first time since 2016 in New South Wales and Murray-Sarling Basin. However, BOM predicts that some regions of New South Wales and South Australia will get below average rain in June and August.

Two photos of New South Wales taken by NASA’s Aqua satellite show strikingly what happened in the state due to drought. In the photograph taken by Aqua in May 2018, while the brown images dominate the province, it can be seen that the region is greening much more than before in the photo taken in June 2020.

In the Victoria state of Australia, a record amount of rain occurred in early 2020. In the city of Melbourne, Victoria, there was 8 times more rain than the rain seen in the same periods of the past eight years in January-April 2020. The Australian Meteorological Bureau predicts that the Victoria state may have a drier season than it should be in the coming period.

Record levels of precipitation in Eastern Australia in the first half of 2020 help farmers to have a better time in addition to eliminating water shortage in the region. However, the effects of prolonged drought in the Murray-Darling Basin have not yet been compensated for. Although the recent rains improve the water situation in the region, available water levels are still very low. BOM explained that the traces of the lack of precipitation in the region may improve after a few important rains.