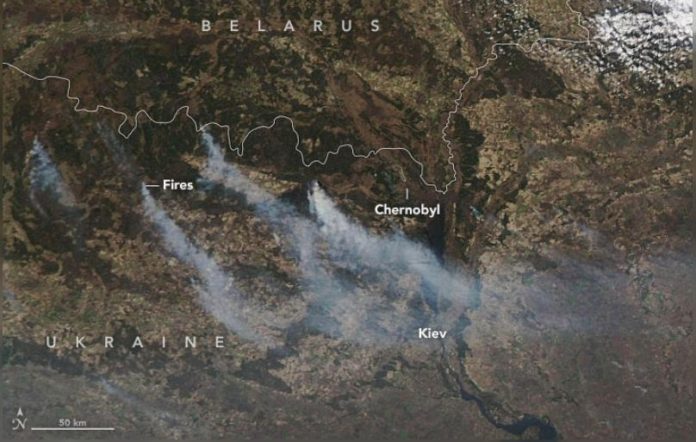 Planet Labs recently released a satellite image of forest fires that broke out near the village of Vladimirovka Kotovskogo in Ukraine. The shared image shows that fires continue near the ghost town of Pripyat.

A forest fire broke out last Saturday near Chernobyl, which was used as the nuclear base of the Soviet Union during the Cold War. Satellite images shared by Planet Labs show that the fires are approaching the Chernobyl Nuclear Power Plant while the fires in the area are still ongoing.

Forest fires first started in 1986 on an area of ​​1,000 square kilometers around the power plant. It was noticed that radiation levels were measured 16 times more than normal as a result of fires. Increasing radiation levels at this point raised concerns about the health and safety of firefighters tasked with fighting flames.

Satellite image of Chernobyl fires:
The satellite images taken show that the fires are currently continuing approximately 8 kilometers inside the ghost town of Pripyat. It is unclear whether the captured images are the same as the fires that started this weekend. In the news in the local press recently, it was said that different fires were detected in the region.

The absence of human intervention in the region, the presence of a large number of dead forests and leaves, makes the area naturally vulnerable to fires. A 2014 study says that if Chernobyl is exposed to more fires covering 10% to 100% of the region in the future, ‘significant amounts of radiation will adversely affect’ Central and Eastern Europe ‘.

It is said that the capital Kiev is not affected by fires:
Although 34 years have passed since the nuclear explosion and wild animals have begun to return to the region, there is still higher levels of radiation under Chernobyl. At this point, the researchers worry about this radiation coming out with fires in the region.

On the other hand, the Ukrainian government says that the suburbs of Kiev and its surrounding suburbs are not affected by fires about 100 kilometers south and the radiation levels are normal there. However, research indicates that increasing climate change increases drought in the region and creates ideal conditions for fires.