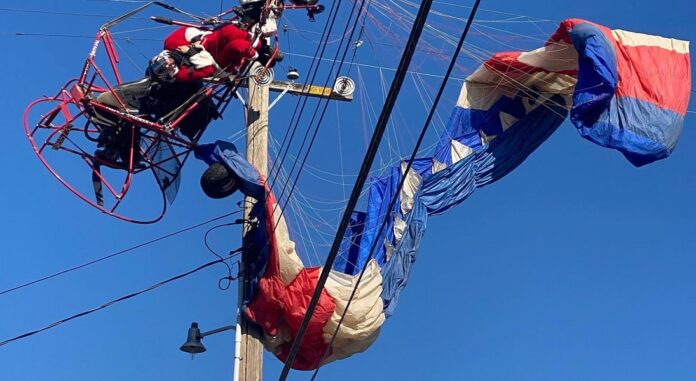 Santa Claus had no luck in one of the stations that was going to give gifts, so he got stuck and had to attend the firefighters to rescue him.

Sometimes things do not reach their destination as we would like, this is the anecdote of a man in good faith dressed as Santa Claus who, while trying to cheer up his neighbors on Christmas Eve, became trapped between the high voltage cables and had to be rescued by firefighters.

The victim, whose identity is unknown, lives in Río Linda, in Sacramento County (California, United States). He was flying in a powered paraglider, and suddenly the thruster system stopped working. Luckily, Santa, a fan of extreme sports, was able to avoid a crash and was not injured.

Santa Claus did not reach his destination

In #RioLinda today #Santa may have lost his way but #MetroFire, @SacFirePIO & @SMUDUpdates made sure he was not long delayed.

W/o a scratch & full of good cheer we made sure Old St. Nick will use his reindeer when he sees you later this year. #MerryChristmas & #HappyHolidays pic.twitter.com/Tl3vNFzhZm

The rescue services had to temporarily cut the electricity in the town to be able to remove the man in red. The operation was carried out in just an hour. “Without a scratch and still full of good spirits, we make sure that old San Nicolás will soon use his reindeer when he visits you later this year,” they commented in the Metropolitan District Sacramento Fire Department.

Fire Captain Christopher Vestal explained that this Santa Claus is mobilized in a small glider described as a “hyperlight” that is composed of an engine and a blower for propulsion, while a parachute keeps him in flight by catching the wind, but that this did not work properly for him.