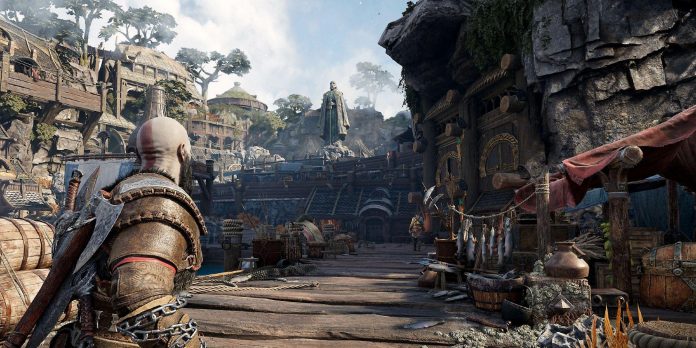 In honor of the upcoming release of the game, an impressive sand sculpture of God of War Ragnarok is shown, on which Kratos and Atreus are standing right in anticipation of their latest adventure. After almost a year, the long-awaited sequel to Sony’s critically acclaimed God of War Santa Monica (2018) is finally being released on both PlayStation systems in November — and demand for the game is so high that a special edition of God of War Ragnarök can be pre-ordered. already disappeared from the warehouse shortly after it became available in online stores.

Three years after the events of the previous God of War game, Ragnarok will see Kratos and his son Atreus travel through the Nine Kingdoms of Scandinavian mythology to uncover the truth behind an ancient prophecy predicting the end of the world. While the ferocious Fimbulwinter rages around them, the father and son duo will find powerful allies and terrible enemies in their latest quest, and Kratos will even come face to face with the cruel thunder god Thor, who was teased in God of War (2018). secret ending. Developers from Sony Santa Monica have said that Ragnarok will be Kratos’ last adventure in Asgard, and Sony is currently doing everything possible to promote its upcoming blockbuster, exclusive to PlayStation, ahead of its release this holiday season.

This includes a demonstration of the stunning sand sculpture God of War Ragnarok, which was installed at the recent Fulong 2022 International Sand Sculpture Festival in Taipei. According to PlayStation Asia’s official Twitter account, this impressive monument to Kratos and Atreus will stand from today until October 10th and depicts a father and son with an amazing amount of detail as they stand in front of the war-torn Scandinavian landscape featured in the official cover of God of War Ragnarok. At the base of the large sculpture is engraved the release date of God of War Ragnarok, which is currently scheduled for November 9, 2022.

Kratos and Atreus tower over this God of War Sand Sculpture

The presentation of the God of War Ragnarok sand sculpture at the Fulong 2022 International Sand Sculpture Festival in Taipei from today until October 10.

This is not the first time that Kratos from God of War is depicted in the form of sand, as an equally impressive image of the Ghost of Sparta was seen near a shopping mall in Qatar last year — shortly after the official presentation of God of War Ragnarok. September live broadcast of the PlayStation Showcase 2021. Since then, the excitement around God of War Ragnarok has been growing, and fans are making their own predictions about how the story of Kratos and Atreus in the Nine Worlds will end and which characters from the God of War franchise with Scandinavian and Greek roots may appear during the game. this monumental final chapter.

These fans won’t have to wait long for answers to these questions in God of War Ragnarok, and the game’s extensive advertising campaign is already in full swing. The impressive sculpture of the God of War Ragnarok, presented at the Fulun International Sand Sculpture Festival in 2022, is a perfect example of this, as it looks like it could easily have been a monument in the universe telling about the epic journey of Kratos and Atreus to uncover the secrets of Ragnarok and save the world. the world is from imminent doom in what could be the last chapter for the couple.

Yoko Taro Confirms That The NieR Saga Is Over, Although She...