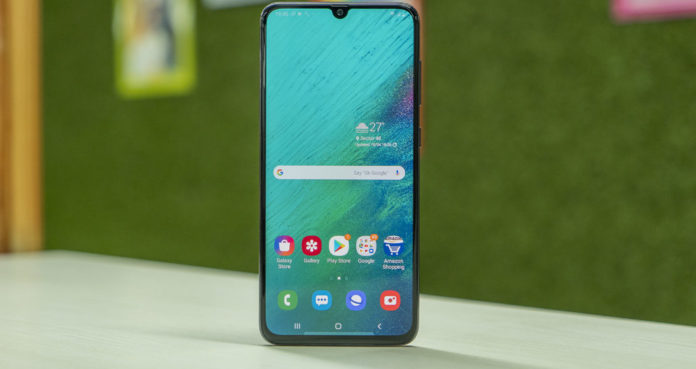 Samsung has hosted phones at every price in its new Galaxy A series. However, Samsung seems to have found a small gap in the market. The first information leaked from Samsung, which produced a new phone to fill this gap, with the permission of Steve Hemmerstoffer.

According to the first information, the notched screen is still in the new models. As with the Galaxy A70 series, the Galaxy A70e will welcome us with a notch screen and triple camera. This phone, which will follow the trail of the Galaxy A70, will carry almost the same features as the A70. The screen itself also goes from 6.1 inches to 6.7 inches this time. It is also planned to make the screen frame smaller and replace the in-screen fingerprint scanner with a more traditional application. Samsung will replace the Infinity-U panel with thicker frames and the Infinity-V alternative to reduce costs on its new phone.

Samsung has announced it has placed the rear camera setup vertically in the upper left corner. But the biggest concern about the phone was the price performance ratio. Some large sensor drops are expected due to the low price tag. However, the phone still has three sensors on the back. More detailed information is unfortunately not available, but Samsung is still said to have developed a primary camera, an ultra-wide-angle sensor, and some depth sensors for portrait photography.

Headphone jack
Some Samsung users claim that Samsung betrayed its most loyal fans by throwing the 3.5mm headphone jack, which is popular with the Galaxy S20 series. Fortunately, the company still uses the headphone jack in its mid-range segment.

Samsung looks eager to capitalize on Galaxy A70’s success
The Galaxy A70 was launched early last year and has managed to become one of Samsung’s best-selling smartphones after being released. The updated Galaxy A70 continued this momentum in the second half of 2019. Thus, although the new Galaxy A71 is expected to continue advancing this year, the Galaxy A70 still appears to have a strong reputation among consumers. In short, the Galaxy A70 does not seem to turn over the throne easily.

Steam Deck Will Not Have Exclusive Games, Guarantees Valve