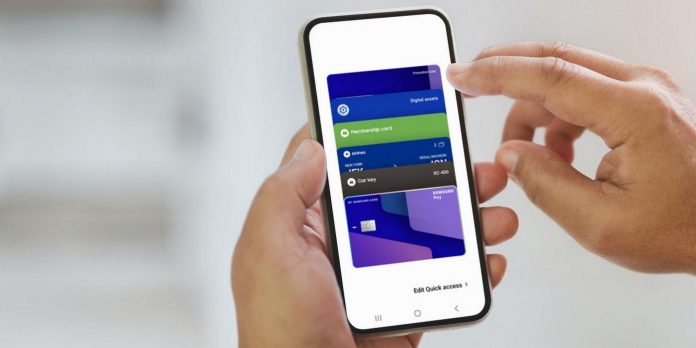 Samsung has launched a new digital wallet service called “Samsung Wallet”, which will allow users to store their favorite digital keys, boarding passes, ID cards and more in one place. The new app was first unveiled at an Unpacked event earlier this year, where the company described it as a “seamless, user-friendly and secure experience” for users. Samsung initially launched Samsung Wallet almost a decade ago, and discontinued its release a couple of years later as part of a concerted push towards Samsung Pay. The original Wallet app was modeled on the Apple Passbook app (after being renamed Apple Wallet) and offered push notifications based on time and location to alert users when they could use the passes stored in their account.

Wallet applications are becoming increasingly popular for storing digital payment cards that facilitate contactless payments. Apple Wallet is one of the best and most notable examples of such applications, offering the ability to store a variety of virtual cards, including QR codes of vaccination from COVID—19, digital credit and debit cards, store coupons, loyalty cards and bonus cards, gift cards. maps, event tickets, membership cards and much more. They also usually allow users to store plane boarding passes, transit cards, student tickets, hotel key cards, etc. It is said that along with Apple and Samsung, Google is working on adding many new features to Google Pay to make it more convenient. a comprehensive digital wallet.

The new Samsung Wallet application combines Samsung Pay and Samsung Pass into one platform, and also integrates with SmartThings to open doors with digital house and car keys. Moreover, the service also supports cryptocurrencies and integrates with Samsung Blockchain Wallet to help users control their cryptocurrency portfolio. According to Samsung, people using compatible Galaxy phones with Samsung Pay support running Android 9 Pie or later can upgrade to the new Samsung Wallet starting today. The service is available in the US, UK, France, Germany, Italy and Spain, but it is unknown whether it will expand to other markets.

Screenshots are provided by Samsung.

As for some other things that users can do with Samsung’s new mobile wallet, the company says that people can use it to verify people’s identity using their biometric data to help them log into apps and services quickly and easily, as well as store documentation. For example, proof of vaccination against COVID-19. Samsung also said that later this year the wallet will support official identification cards such as driver’s licenses and student ID cards from some educational institutions. In addition, Samsung Wallet will support boarding passes from Korean Air, but it is unclear when it will add support for other airlines.