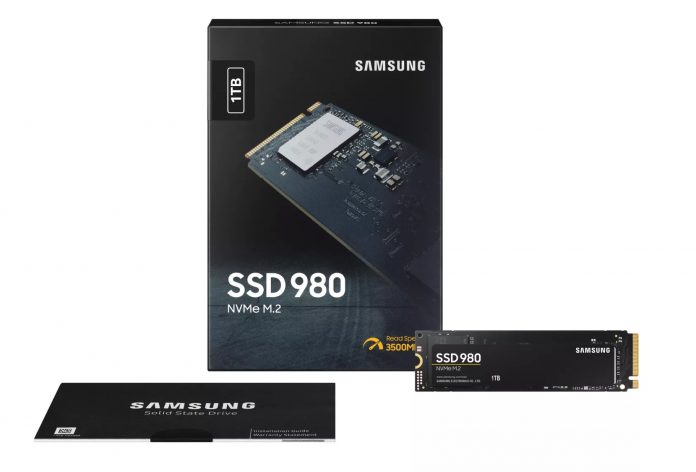 The reason for its low price is that the SSD 980 is Samsung’s first NVMe SSD without DRAM. Many other storage manufacturers have also had varying degrees of success in this cost-cutting method. The SSD 980 lacks fast dynamic random access memory, which is normally used to map the contents of an SSD, helping it deliver your data quickly and efficiently.

Still, despite removing this feature, Samsung performs impressive compared to other DRAM-free options. Because this driver takes advantage of the Main Memory Buffer feature in the NVMe specification. In the case of the Samsung SSD 980, up to 64MB of space is taken from the CPU’s DRAM via PCIe to fill the gap on the SSD side. After all, though not as fast as an SSD with its own DRAM, the Main Memory Buffer feature helps it perform much better than a completely DRAM-free model while saving users on the cost side. Samsung says this SSD can reach speeds up to six times that of a SATA-based SSD.

Samsung’s Intelligent TurboWrite 2.0 feature, which also helps ensure these high speeds, increases the maximum allocated buffer zone from 42 GB in the 970 Evo to 160 GB in the 980. This feature simulates fast single-layer cell (SLC) performance in the 980, although it uses 3-bit multi-layer cell (MLC) memory and aims to provide sustainable performance when transferring large files.

As always, there is a sharp drop in performance for lower capacities. The low-end 250GB model achieves sequential read speeds of up to 2,900 MB / s and sequential write speeds of 1,300 MB / s. Another highlight of the series is Samsung’s claim that even without DRAM, random read and write input and output speeds during intense tasks are similar to the 970 Evo and not far from the 970 Evo Plus.

So even if it skips a component that helps an SSD run fast, the Samsung SSD 980 still looks very fast. For those wondering, Samsung’s benchmarks have components such as the Intel Core i7-6700K, Ryzen 7 3700X and 8GB 2,133MHz DDR4 RAM.