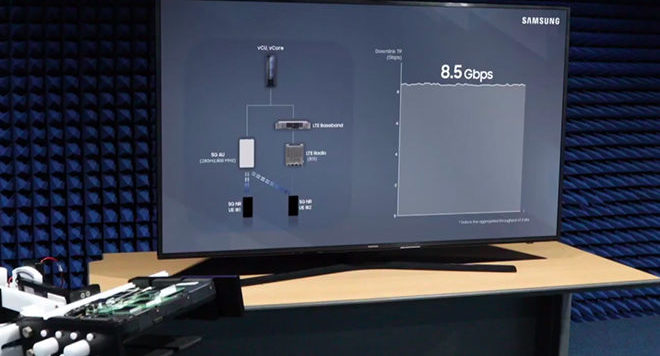 Samsung, like other companies, is getting ready to switch to 5G technology. The company, which conducts experiments in this context, reached a speed of 8.5 Gbps and broke new ground in this field.

5G technology will soon replace the alternatives used today. Telecommunications companies and electronics manufacturers have stepped up their efforts to keep pace with 5G technology. With the 5G technology, very high speeds will be reached, so that transactions can be done quickly. While many users were waiting for this technology, a new news came from Samsung.

Samsung Electronics has announced that it has achieved the fastest 5G speed in the industry by combining multiple channels in the high frequency band. Samsung 5G ultra high frequency (mmWave) unit was used in the experiment. Samsung introduced the 5G NR unit built for the extreme high frequency spectrum during the Mobile World Congress in Los Angeles in October 2019. It uses over 1,000 antennas in the access unit with MIMO technology.

Samsung managed to achieve 8.5 Gbps speed:
In the last test, Samsung used 2 devices equipped with the latest 5G modem chip. These devices sent signals to the ultra-high frequency unit, and both devices reached a speed of about 4.3 Gbps. Samsung managed to reach the highest speed in the industry by reaching 8,5 Gbps speed between 2 devices.

Earlier this year, Samsung conducted an experiment with Verizon, which used a base station in Texas. In the experiment, Verizon combined the 800 MHz frequency spectrum and the 28 GHz frequency spectrum using Samsung’s 5G NR unit, but both parties preferred not to share the data. Considering that 5G mobile phones are not common, probably not much traffic has been generated. Verizon stated that Samsung is using this unit commercially.

Samsung continues to work in South Korea and the United States for extremely high frequency technology. The company also states that it has begun to support 5G efforts in Japan.

Billie Eilish premieres a music program with her father

Bitcoin could stop accompanying the fall of traditional markets, according to...

TI, the scandal of virginity tests: his daughter knows that his...