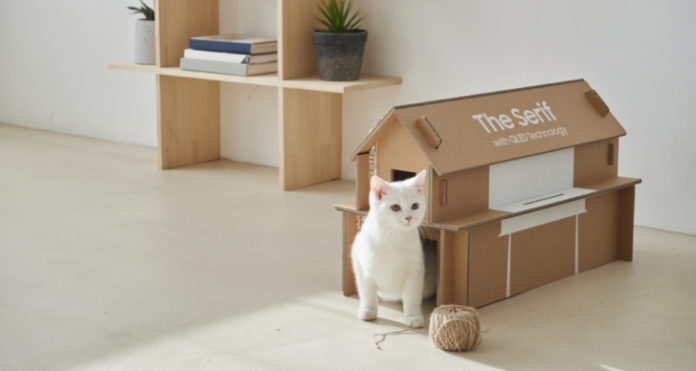 Samsung uses environmentally friendly cardboard boxes announced in CES 2020 on some television models. The company places a QR code on these boxes and explains what kind of products these cartons can be transformed into. Samsung also offers awards for the best designs to be created with cardboards.

South Korean technology giant Samsung serves millions of consumers with its products in the consumer electronics group. The company gains appreciation of consumers with its smart phones as well as its wearable technological products, white goods and televisions. The company, which has occasionally signed under social responsibility projects, has now launched a new project. Samsung’s new project aims to promote the use of recyclable materials.

Within the scope of CES 2020 events, Samsung announced the corrugated boxes that it described as “environmental friendly”. The main idea in these boxes was to use resources more efficiently. The company even became the winner of the CES 2020 Innovation Awards with its new cardboard boxes. The company has now announced that it has brought these boxes together with consumers and started a competition.

Samsung will use packaging made from recyclable materials on television models called The Serif, The Frame and The Sero. Consumers who purchase one of these products will also have these cardboards directly. Consumers will be able to produce useful materials for their homes using these environmentally friendly cardboard boxes that come with the TVs they buy. Samsung will even explain how these cartons can be evaluated with the help of QR codes placed on the boxes.

Consumers who want to evaluate Samsung’s environmentally friendly packaging; they can create boxes or shelves in which they can put their belongings. For example, using these cardboards, you can create a small table for yourself, a newspaper and even houses for your pet friends. Samsung will also reward consumers who bring the most creative designs of these cardboard boxes, where much more can be done.

The contest launched by Samsung on environmentally friendly packaging is carried out in conjunction with a UK-based lifestyle magazine called Dezeen. As of today, the competition can be attended free of charge from all countries served by Samsung. If you manage to create one of the most creative designs by using your imagination, you can take your share from the 20 thousand dollar prize pool.

Frauds from FGTS cause losses of R $ 2 million per...

Golden Globes announce changes to its rules by COVID-19

Apple pressed the button for the A14X processor

Apple remains at the top of the wireless headphone market