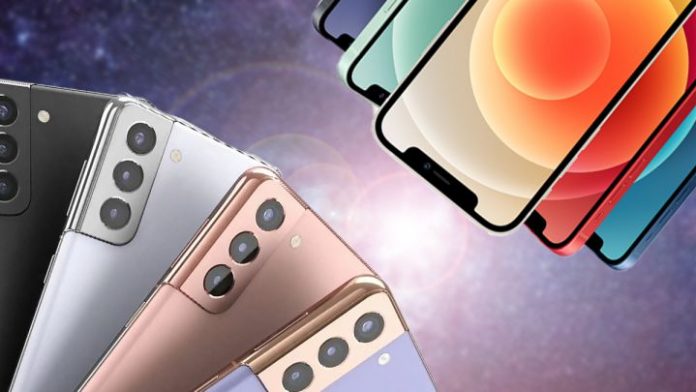 Finally, today is the day that we know all the details of the Samsung Galaxy S21. The Korean firm has not disappointed with the design of the device that we already saw at the end of 2020, nor in features. But now you will be asking yourself the million dollar question: which is better, the Samsung Galaxy S21 or the iPhone 12? Keep reading and we will compare these two high-end smartphones.

The aesthetics are obvious

Samsung and Apple have an eternal struggle to see which is the strongest in the smartphone market. As you know, each of its terminals operates under a different operating system, but this is not the only thing that differentiates the Samsung Galaxy S21 from the iPhone 12. If you take a look at them you will know which is which by looking at its external structure.

Far from the technical sections, the front of both is very characteristic. Samsung is committed to making better use of the screen by leaving a hole in the upper part to locate the camera. Apple for its part maintains the notch that made the iPhone X famous and since then maintains its space in almost the entire upper part of the front. The numbers indicate that both devices are very similar and you do not notice the difference of 6.2 “on the Galaxy S21 versus 6.1” on the iPhone.

The architecture is also different as for the first time Samsung integrates the encapsulation of in-line cameras at the edge of the device. In the bitten apple you see a line arrangement of two lenses embedded in a square surface. Following this line, the Korean house continues with the rounded bezels while those from Cupertino opted for an aesthetic change that was not seen since the iPhone 5 with its smooth edges.

A big difference in cameras

If we focus on the multimedia section we have to talk about the cameras, where the Galaxy S21 takes advantage of the iPhone 12. We find one more lens in the Korean terminal, which sports a composition of three lenses with 64 + 12 + 12 MPX in its telephoto, ultra-wide and wide-angle lenses. If we go to the device of the bitten apple we find two objectives of 63 + 12 MPX.

Power and performance in the Galaxy S21 and iPhone 12

This is one of the important points that attract the attention of users. Both have a 5nm chip inside, not to mention that they have the latest in 5G connectivity. Mobile payments via NFC, next-generation Bluetooth and WiFi 6 are some of their shared improvements, but there are notable differences. If we look at the biometrics section, the S21 is the only one that keeps the fingerprint thanks to its ultrasonic sensor under the screen.

As for the battery in the Samsung Galaxy S21 you will have 4,000 mAh while in the iPhone 12 it only reaches 2,815 mAh. The difference is notable and a priori it is the Korean house that wins in this feature, although it all depends on the use that the user gives it.