Samsung and Huawei, two major competitors in the smartphone market, have already put their cards on the table for the first half of 2020. The Samsung Galaxy S20, launched on March 6, 2020 and the Huawei P40, presented on the 26th of the same month, it has a similar look, but there are striking differences in software, hardware and target audience. Who will win?

On the outside – especially at the rear – both top of the line adopt the same look. The similarity is so great that we can hardly distinguish them in individual photos. The set of cameras is assembled in a tray sprung at the rear, while the edges of the device are rounded and the side buttons are in exactly the same positions.

The front part, in turn, is not deceiving: the Huawei P40 has a generous cutout in the upper left corner to fit a camera and infrared sensor, while the Galaxy S20’s camera interferes with the display in only one centralized hole. 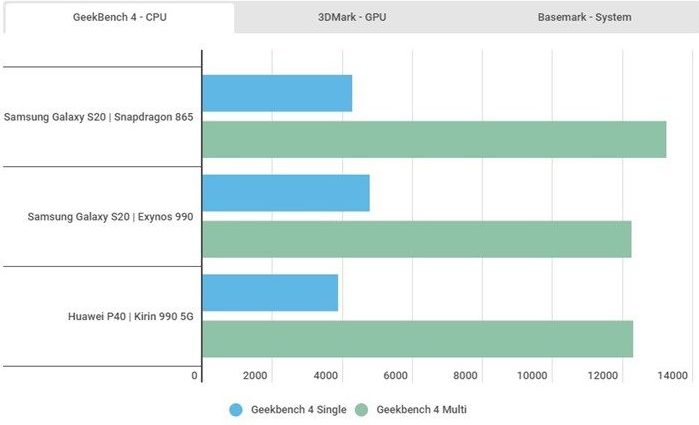 The screen, size and resolution also has considerable differences. The Samsung Galaxy S20 brings more modern technologies, starting with the 6.2 ” screen in Dynamic AMOLED with Quad HD + resolution (1440 x 3200) and refresh rates of up to 120 Hz. The Huawei P40 is disappointed with the 6.1 screen ” in OLED and Full HD + resolution (2340 x 1080) and 60 Hz refresh rate, common to all simpler smartphones.

In terms of hardware, the comparison goes to the numbers – and again, the Galaxy S20 takes advantage. The Snapdragon 865 chip outperforms the Kirin 990 5G in 3 different benchmarks: Geekbench 4; 3DMark and Basemark. In the graph, the difference is not striking – it has little impact on the user experience – however, the amount of RAM can be an obstacle: Samsung’s top of the line has 12 GB of memory, while the Huawei P40 goes up to 8 GB. There are abundant amounts of main memory, but the experience with applications in the background should be more stable with Samsung. 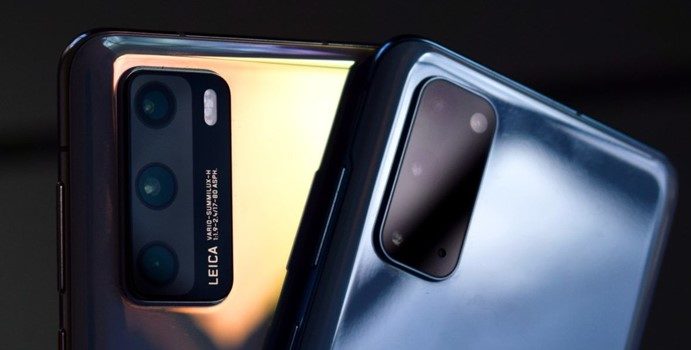 Cameras
The triple set of rear cameras has little difference on paper, but behaves differently when put on the field. The Android Authority website was able to get its hands on both models and gave us the perception that the two capture great images in bright environments, reserving differences that even depart for personal taste.

The Samsung Galaxy S20 featured captures with more vivid colors, almost exaggerating the color display – in addition to presenting a warmer tone. Huawei’s flagship, on the other hand, presented images with less glaring colors – which shows inferior results in some photos – and presents a colder tone, emphasizing in shadows and dark corners.

When talking about ultrawide cameras, the scenario is the same: the South Korean model has a larger field of view, but exaggerates in the exhibition; the Huawei P40 has photos with a smaller angle, but preserves the tone of the environment.

Dark scenes and the respective Night Mode also highlight peculiarities. The Galaxy S20 handles dimly lit environments very well without losing definition; the Huawei P40 does a great job, but attentive looks will notice a loss in the details of the capture.

It is valid to search for more examples of captures from both smartphones or wait for detailed analysis of the devices. TecMundo has already made a complete analysis of the Samsung Galaxy S20 Ultra, where we unravel the characteristics of the top line of the South Korean.

Is Google missing?
For us Brazilians, mostly, yes. Even if we are not regular users of the Google ecosystem, with all its applications, the presence of Google Services apps is essential to provide the Android experience as we know it, since it is responsible for transferring data from the smartphone with the application structure.

From the app store, authorization to run apps. The absence of Google Services can prevent you from downloading more popular applications like WhatsApp and various games.

In Huawei’s alternative, the AppGallery Store, is still quite limited and receives little by little popular applications in the West. Snapchat, Telegram, NordVPN and some others are now available for download and should work without problems. In addition, the popular Google Maps is also compatible with the Chinese system.

Still, it is possible to manually download applications in “.apk” format from third-party websites. However, we emphasize that this practice exposes your smartphone to the dangers of unverified software downloads.