Home Tech Samsung Galaxy A72 and Galaxy 52 with innovations 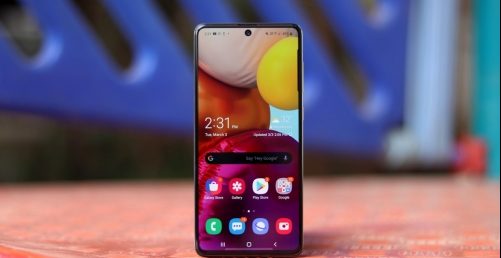 After leaks we’ve seen for a while, Samsung’s new Android phones Galaxy A72 and Galaxy A52 were introduced. In fact, Samsung also introduced the Galaxy A52 5G at the Galaxy Awesome Unpacked event. However, we will see 4G supported models of the A72 and A52. Galaxy A series models attract great attention. Similar attention will be paid to these two new models. Galaxy A72 and A52 have remarkable innovations compared to their predecessors.

Samsung has designed the two new phones very similar to each other compared to the previous years. Apart from the different screen sizes and a camera on the back, it does not seem possible to distinguish between the two phones by their appearance. Both phones come in different color options such as black, white, lavender, and blue. Samsung has used the reinforced polycarbonate back, which was previously used in Note 20 and S20 FE models, this time on the A72 and A52. There is Gorilla Glass 5 glass on the front, while the edges are surrounded by a plastic frame. With the A72 and A52, the Galaxy A series is water and dust resistant for the first time. These two phones are IP67 certified, offering durability for half an hour in water up to a depth of 1 meter.

The camera modules are identical in appearance and as we have said, it is possible to distinguish only thanks to the difference of one camera. The camera module in models such as the A71 and A51 did not look very nice. Samsung has carried the camera module design, which was previously included in flagship phones, to these two phones. The rectangular shaped camera modules are similar to the rest of the back. In the meantime, let’s note that both phones have a matte back surface.

Looking at the screen side, the Galaxy A72 and Galaxy A52 models feature a 6.7-inch and 6.5-inch screen, respectively. Both of these screens have Full HD + resolution. Super AMOLED technology is used. Brightness and clarity are enough. Moreover, with the use of the AMOLED screen, the in-screen fingerprint reader becomes available. On the other hand, face recognition can also be used thanks to the selfie camera placed at the top of the screen.

Another feature of the screen on both phones is that it has a refresh rate of 90 Hz. There is a maximum screen brightness of 800 nits. HDR support can also be used in applications such as YouTube. The screens of both phones offer enough screens for watching videos, browsing the internet, reading stuff. Users will enjoy a good multimedia experience. Another welcome development on the multimedia side is that the A72 and A52 have dual speakers. The stereo sound effect is high and the output is strong too. It will not require an external speaker. Another good news is that the Galaxy A72 and A52 models feature a 3.5mm headphone jack. Considering that no headphones come out of the boxes, the presence of this unit gains a special value.

On the processor side, both phones come with a Snapdragon 720G processor. Considering that this phone is aimed at young people in general, this processor, whose game side is also taken into consideration, will help young people have a good gaming experience. However, let us state that the 720G is an older processor. 8 GB of RAM, 128 GB of internal memory and a microSD card slot that supports cards with a capacity of up to 1 TB are among the common features of the two phones. Both phones also have a version with 256 GB capacity. Let’s not go without mentioning that there is also support for dual SIM cards.

On the battery side, we see that Galaxy A72 has 5000 mAh and Galaxy A52 has a capacity of 4500 mAh. Samsung promises a working life of up to two days for both phones. In addition, both Android phones have 25W wireless charging support. However, only the A72 comes with a 25W power adapter. The A52 will also have a power adapter in the box.

The Samsung Galaxy A72 and Galaxy A52 models come with Android 11 and One UI 3.1 installed above it. We also see the user interface that Samsung offers innovations with the Galaxy S21 series on these phones. Lock screen widgets, option to use Google Assistant or Samsung Free on home screen. Samsung is also making a commitment to deliver security updates for both phones for the next four years.

Both Galaxy A72 and Galaxy A72 have four rear cameras. 64-megapixel, main camera with optical image stabilization, 12-megapixel ultra-wide angle camera, 5-megapixel macro lens common to both phones. The 5 megapixel depth sensor on the Galaxy A52 is replaced by an 8 megapixel telephoto camera on the A72. Thanks to this telephoto camera, the Galaxy A72 offers 30x Space Zoom zoom. We also see the Single Shot mode in the camera interface. In addition, with the cooperation of Samsung and Snapchat, it is possible to access Snapchat’s fun filters from within the Camera app. On the video side, we see 4K video recording. While recording 4K video, there is also the possibility to take 8 megapixel still photos. Pro video mode is also available. Both phones have a 32-megapixel selfie camera on the front. With the selfie camera, you can also use the Fun mode, which includes Snapchat filters.

One UI 3.0 gets official arrival forecast in Brazil