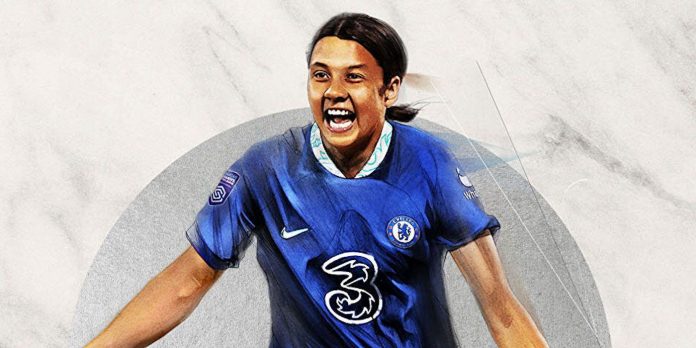 The original FIFA International Soccer was released back in 1994, and since then, annual editions have been based on it. The series prides itself on reliably imitating your favorite game of football, showing real athletes, smart artificial intelligence of the opponent and authentic game mechanics. Recent works have focused on photorealistic graphics: legendary football stars such as Kylian Mbappe and Lionel Messi appear in the game using motion capture technology. Last year’s FIFA 22 was considered a successful evolution of the series thanks to new features such as VOLTA’s special abilities and returning modes such as Career and FIFA Ultimate Team. Paris Saint-Germain striker Kylian Mbappe was an athlete from the cover of FIFA 22, and the next episode of the series will tell about another legendary player.

Link: How much money does FIFA 20 earn per minute, according to the data

England Women’s Super League champion Sam Kerr has achieved outstanding success since joining the professional football world in 2008. Kerr is currently the captain of the Australian national women’s soccer team “Matildas” and is considered the all-time leading scorer of the Australian men’s and women’s national team. She is also the top scorer of the entire National Women’s Soccer League in the United States, and overall she is considered one of the greatest soccer players in the world, as well as one of Australia’s most famous athletes. Sam Kerr’s athletic skills and dedication to football cannot be overstated, and performing on the cover of FIFA 23 allows the star to reach another important milestone.

Sam Kerr will appear as a new athlete from the cover of the FIFA title, which will coincide with FIFA 23, including the men’s and women’s World Cup tournaments. Thus, FIFA 23 will be the first entry in the series, on the standard cover of which a female athlete is depicted, which will be a significant event for the presentation within the framework of the extremely popular franchise. Kerr will appear in standard versions of the game in Australia and New Zealand, as well as in Amazon exclusive versions for the rest of the world. The standard edition of the game for the rest of the world will again feature Kylian Mbappe, and the cover of the Ultimate Edition of FIFA 23 features Mbappe and Kerr. Although Sam Kerr won’t be appearing in every edition of FIFA 23, her presence is a huge plus for women’s soccer.

According to statistics, football is the most popular sport in the world, and it is reasonable to reflect the entire game base in the FIFA series. More new FIFA games are sure to be released in the coming years, and the inclusion of Sam Kerr as a FIFA 23 cover athlete promises wider representation in the future. Female football legends such as Alex Morgan and Abby Wambach are popular enough to take a place on the cover of a future FIFA issue, but this year Sam Kerr is getting well-deserved attention.

Final Fantasy VII Remake Intergrade Fixes One of Its Most Infamous...