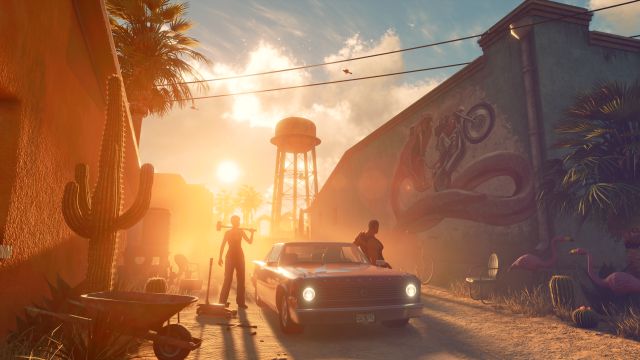 Saints Row: Volition shares new images from Saints Row to explain to the community what direction the brand has taken with this reboot.Saints Row reviews its main keys through a 7-minute video with Spanish subtitles. Several members of the team, including its creative director, Brian Traficante, share with the community what we can expect from this first look at the reboot of the most popular Volition saga.

A review of Santo Ileso

Its managers emphasize from the beginning that the objective of this return is “to be able to make the best Saints Row to date”. Hence the concept of open world, which will be extended in this installment with a new playable area: Santo Ileso. “It was a big change for us, because it is a very different location. The desert is majestic with its relief and its colors. The red rocks, the sandy terrain, the famous sunsets, the postcard landscapes come to mind ”, explains the study in a press release. “It has a lot of history, culture and diversity behind it.”

The franchise pays special attention to the threats that we will find in the districts of the world. This reboot will point to the roots of the saga: the factions. Through Santo Ileso we will find the Marshall, Los Panteros and Los Idols; each has a different culture, personality, and fighting style. As boss (or boss), you will have to join forces with Eli, Neenah and Kevin to be the owner of the show.

“We have paid as much attention to detail as possible. We wanted to create a new world full of things to discover, in which everyone could feel included. Our character team, our customization, the options are incredible, ”explains Volition. “You create the character your way, you build a criminal empire your way, you earn money your way … All that combined leads us to the philosophy of starting from scratch.” For them, this “strange combination” is not seen “in other games”.