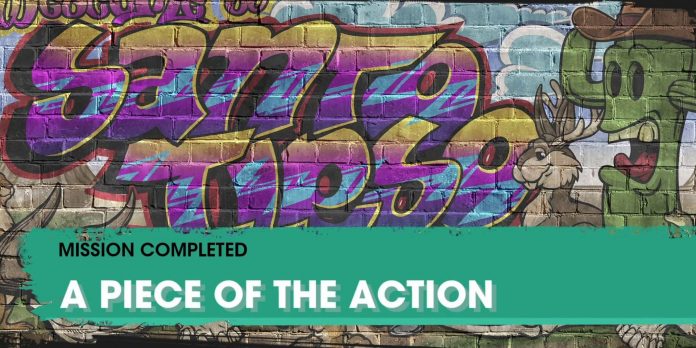 “Part of the Action” is the fifth main story mission in Saints Row, which becomes available after the players have completed the “Watch and Report” task for Gwen. The goal of the mission is to recover some stolen car parts for JR, who, after the chaos of the last mission, plans to go out of business and open his own garage. He will offer players a percentage of the business for help, but they will need to get their hands pretty dirty to earn their reward.

As JR explains at the beginning of the mission, the car parts were stolen by the Idols, one of the many violent gangs that roam the world of Saints Row. These anarchist neon enthusiasts are incredibly dangerous and can cause players serious problems if they are not careful. With this in mind, players will need to bring their game to exit the mission unscathed.

How to perform the “Part of the action”

After they talk to JR to start the mission, players must go to the location marked on the map. However, instead of firing all the guns, the game character will come up with some story about wanting to join the idols, allowing them to enter the idol camp unhindered. Once there, players will need to head to the yellow circle and then talk to Cheryl in a snake mask, thug Martin and Timmy O, an Idols contestant who is busy repairing his bike.

When asked about the stolen car parts, Timmy O will direct the players to the nearest warehouse, where they will find a storage container and a group of angry idols. Despite Kevin’s request for a peaceful approach, there is no way to avoid conflict here, so players can go ahead and destroy the idols as they see fit. Most of them are fairly easy to deal with, although those with rotating neon weapons can only be hit in a short window after they have thrown it, or by taking a takedown using Triangle (PlayStation) or Y (Xbox).

After destroying all the enemies, players must jump into the nearest buggy, and then attach the tow rope to the container. The game doesn’t really explain exactly how they should do it, but through trial and error, players will soon discover that the R1 (RB on Xbox) button can be used to launch a buggy tow rope from the back of the car. With this in mind, it’s enough to simply position the buggy so that the container is directly behind it, and then press the appropriate button to attach the cable.

After attaching the tow rope, several members of the Idols will start chasing. Players can try to destroy them using the shipping container as a weapon if they want, but it’s probably a lot easier to just take the container back to JR’s place and then deal with any Idols members who are still chasing it. . Several more waves of idols will appear after the players return the parts of the machine, but if they use a lot of shelters throughout the area, they should not have much trouble destroying them.

Awards “Part of the action”

Once all the idols are dead, the mission will be completed and players will receive $1,000 in cash and 3,000 XP. They will also unlock the Idols Anubis helmet, Jimrob’s garage, car customization and the CA$H TRAN$FER app. Although they won’t be able to move directly to Jimrob quickly, there is an unlockable place nearby to move quickly, so while they’re here, players should definitely consider visiting the Panther Rock landmark if they haven’t already.

Genshin Impact player managed to push Wei into the abyss