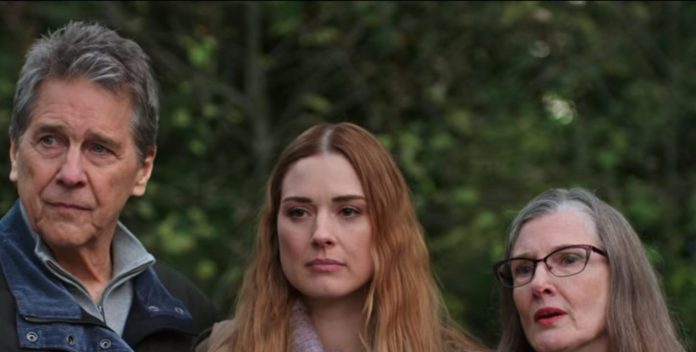 Recall that the fate of Doc Mullins (Tim Matheson) was left up in the air at the end of the second season of Virgin River. In turn, fans will remember how at the end of the series, Doc has some news to share with Hope McCrea (Annette O’Toole). As a result, some viewers worry that she may be dying.

Likewise, the season finale of Virgin River had some major implications for the cast of the hit romantic drama. This included Jack Sheridan (Martin Henderson) shot and left for dead.

In addition to this, Preacher (Colin Lawrence) was tasked with caring for Paige Lassiter’s (Lexa Doig) son. One character that fans are particularly concerned about in the wake of the ending is what the future holds for Doc (Tim Matheson).

As Virgin River fans will recall, he had been experiencing some strange symptoms throughout the series. Add to that several mood swings, as well as some headaches.

Then in the final episode of Virgin River, he visited a doctor and was about to reveal what was wrong with him. However, before he could, they broke into Hope’s house, where city residents were throwing a surprise engagement party for the couple.

This means that Virgin River fans have only been left to speculate what might be wrong with the city’s doctors. For this reason some are especially concerned that he could be in danger of death after his diagnosis.

“I think he has cancer or is about to lose his eyesight!” Expressed a fan.

“Because if you notice, he has trouble reading the show card, then the check after they finished eating, and finally he was avoiding all the paperwork and asking Mel to do the same,” he added.

Meanwhile another Virgin River fan added that he thought he had a brain tumor. All of this could mean that the beloved character is in serious jeopardy for his health, at the moment it seems the truth will only be revealed in the show’s third season.

Not much is known about what will happen next, but there are certainly some stories that need to be worked out when the show returns. On the other hand, seasons 1-2 of Virgin River are already available on the Netflix platform.