Home Entertainment S.T.A.L.K.E.R. 2 Changes Its Name On Steam As Vindication Against The Invasion... 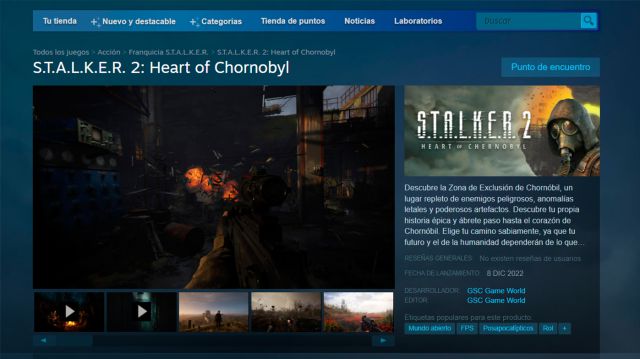 S.T.A.L.K.E.R. 2: GSC Game World, the creators of the long-awaited first person shooter sequel that is now at a standstill, are slightly changing the title in protest. S.T.A.L.K.E.R. 2: Heart of Chernobyl is renamed S.T.A.L.K.E.R. 2: Heart of Chornobyl on PC. This can be seen in the official file of the title on Steam that in the last few hours it has undergone this small change in its title. At the moment GSC World, creators of the long-awaited video game, have not specified the reason for this small detail, although the PC Gamer medium points to a form of vindication against the invasion of Ukraine, home of its creators, by Russia.

S.T.A.L.K.E.R. 2 goes from Chernobyl to Chornobyl

Thus, the reason for this small detail in the title of the game would be related to the decision to show the name of the city of Chernobyl in Ukrainian, being Chornobyl. All this as a sign of protest and claim for the war that is raging in the country by the Russian army, it seems. And it is that since the famous radioactive incident of 1986, the city has been known popularly and internationally as Chernobyl, although in fact its Ukrainian name is the one that now shows the game on Steam.

At the moment the measure affects only the title of the game on Steam and its different descriptions on the Valve page, since in promotional images of the game and on social networks, as well as on the title page in the Microsoft store, it continues to be maintained. the title of the original game, i.e. STALKER 2: Heart of Chernobyl. We will see if this small change ends up being confirmed on the rest of the platforms and promotional materials or is it just a provisional protest movement on Steam.

Let’s remember that GSC World paralyzed the development of the video game until further notice due to the war situation that Ukraine is suffering at the moment, also sharing a making of video of these last weeks and that you can see heading this news.

Phil Spencer Believes In The Future of Narrative-Focused Games