Home Celebrity Ryan Reynolds stuns in a bra inspired by “Deadpool” at the Hasty... 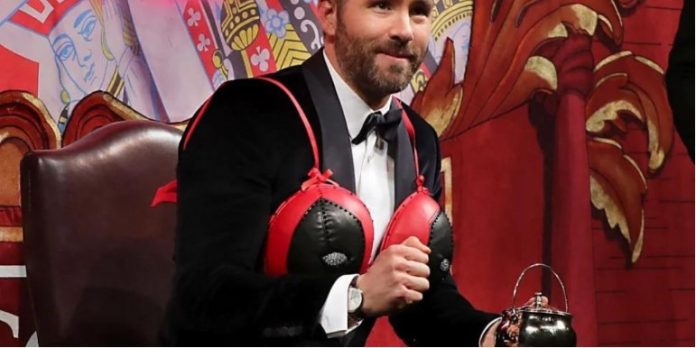 The trait that unites Ryan Reynolds with Deadpool is that they both tend to do surprises. For example, as in the first frame of Deadpool 2 itself, we see a superhero relaxing with a cigarette, and a music box decorated with a dead Wolverine from Hugh Jackman’s Logan plays a melody. It’s very similar to how visitors to the annual Hasty Pudding Theatricals performances didn’t expect to be greeted by a 40-year-old man in a superhero-inspired bra from his own blockbuster.

But they should have seen it coming, given that the 40-year-old was none other than Canadian heartthrob Ryan Reynolds, who thought his wife was “driving a bear” when she was six months pregnant. Visitors to Harvard University’s annual Hasty Pudding Theatricals in 2017 saw Reynolds in his festive mood.

Ryan Reynolds was the soul of the party at Harvard’s Hasty Pudding Theatricals.

After Deadpool’s multimillion-dollar win at the box office, the actor received a lot of praise and accolades. One of them is the “Person of the Year” award at the annual Hasty Pudding Theatricals in 2017. The award is held by the Hasty Pudding Club, whose members are patrons of art and comedy. The committee chose Ryan Reynolds as the person of the year, and we think it was well deserved.

Reynolds, dressed in a classic black velvet suit, gave his all when he took the stage. Kyle Whelihan, a Harvard student, was ridiculously dressed as Blake Lively, but in a zombie version. And Reynolds, being a wonderful husband, showed off his lap dancing skills as soon as he saw the zombie version of his wife. But the fun didn’t end there.

The actor of “Green Lantern” was presented with a bra in the style of Deadpool, which, to our surprise, has not yet become a bestseller on the market. Whether it’s a Deadpool bodysuit or a Deadpool bra, Reynolds can rock both.

There’s a reason why People Magazine keeps picking him as the sexiest man alive. The Hasty Pudding Committee knew what they were doing when they awarded Ryan Reynolds the Man of the Year award. Before the “Free Guy”, this title was awarded to Joseph Gordon Levitt, known for his game in “500 days of summer”. However, there was no lap dancing in this Hasty Pudding Theatricals show.

What do you think about the Reynolds show at the awards ceremony? Let us know in the comments below.