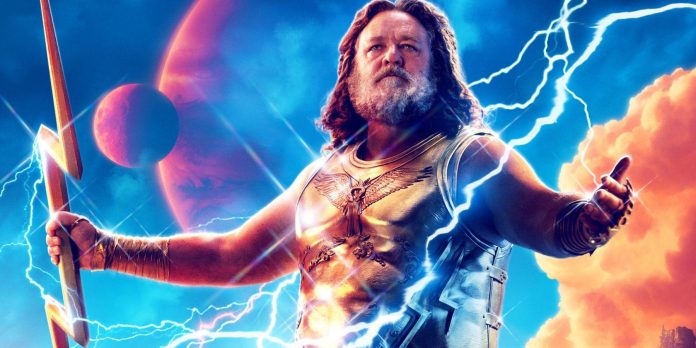 “Thor: Love and Thunder” has finally hit the big screen, and fans are flocking to cinemas in droves. Russell Crowe was one of the many stars in Thor: Love and Thunder, but it seems he almost completely played another character.
“Thor: Love and Thunder” brought a lot of new things to the Marvel cinematic universe. He introduced new characters, locations, and even the rules of an ever-growing universe. One of the many things that this film brought was the introduction of the Greek gods. Zeus appears in this movie, and this character was played by Crowe. The interaction and chemistry between Zeus and Thor, as well as the dynamics between lightning and thunder, were ironic to say the least.
RELATED: Marvel Studios Logo Updated with New Hero
In the recently released concept art, it was revealed that Crowe almost played a demonic character, who, according to many, was based on Mephisto. The photo can be seen on Instagram by Miles Tevez, one of the artists who worked on the Marvel Studios blockbuster. The artist further said: “Russell Crowe can play the comedic role of Satan in the new film “Thor: Love and Thunder”. It didn’t work out that way. I hope it wasn’t because he saw my drawings. Although I would understand.” The artist had a comedic view of another direction in which the filmmakers chose the role of Crowe, but, according to the artist, most likely, Crowe would not have played Mephisto.
Mephisto first appeared in the Silver Surfer comic book series. The character is known for having a huge number of abilities, such as manipulation, illusions, superpowers, immortality and speed, to name just a few. Mephisto is very dangerous, to say the least, but it’s probably for the best that this character has been saved for a future adventure with a darker shade than “Thor: Love and Thunder.”
Despite the new direction of the film, the concept art looked great, and Crowe did his best by playing a popular Greek character. The sight of Zeus’ arrogance and power has become a funny scene for many Marvel martial arts fans. The two personalities collided, and it became clear what separates Thor and Zeus, apart from their mythological origin or titles. We hope fans will see more of the other so-called gods as Marvel Studios continues to pull back the curtain more and more.
As the fourth phase approaches the middle, it will become even more clear what Marvel Studios wants from its heroes and villains. Many want to see more recurring villains, while others just want to get into the mutant world with the X-Men. No matter what happens, we hope the X-Men will arrive in time to work with many of the MCU’s biggest characters.
“Thor: Love and Thunder” is currently being released in theaters.