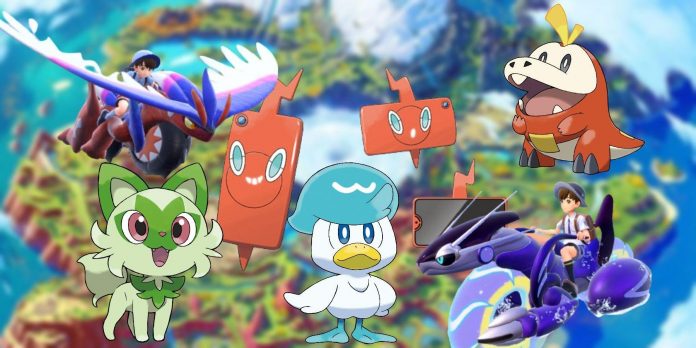 The Pokemon VGC tournament, scheduled for its return to London in August, is a great way to end the Pokemon Sword and Shield era just a few months before the release of Pokemon Scarlet and Violet. Although Gen 8 was poorly received at launch due to the reduction of Pokedex, it eventually added more Pokemon via DLC. As for the expected Pokedex numbers for Pokemon Scarlet and Violet, nothing has been officially announced yet, but rumors and alleged leaks are circulating on the Internet about this.

According to the leaks, Pokemon Scarlet and Violet will feature Paradox Pokemon, so-called regional fakes, several regional forms, evolution between generations and many new creatures. Paradoxical Pokemon are Pokemon that have traveled through time from the past or the future, whereas regional fakes are completely new types of Pokemon that have some characteristics of other existing pocket monsters. This difference matters because today the leader shared the exact number of new Pokemon that appeared in Pokemon Scarlet and Violet.

A well-known insider named Riddler Khu shared an image of a regional Pokedex for Pokemon Scarlet and Violet, which includes only new Pokemon species that will appear in Gen 9. According to the visual representation of Khu Paldean Pokedex, a total of 105 Pokemon are in the main game, with the exception of additional forms that probably belong to regional variants. In this case, since it seems that there are a total of 16 Paradox Pokemon and 5 evolutions between generations, the evolution lines that are exclusive to Pokemon Scarlet and Violet are 84.

However, since Paradox Pokemon supposedly has its own Pokedex numbers, Pokemon Scarlet and Violet will probably bring back these Pokemon from other games with significant changes that are not only cosmetic in nature. As for inter-generational evolutions, they are also brand new Pokemon, just with an existing line of evolution beyond Paldea. Presumably, there are 4 regional variants not included in the leaked Pokedex, one of which is Paldean Wooper, and the other three are regional forms for Tauros.

This means that even apart from rumors of DLC for Pokemon Scarlet and Violet, Gen 9 will have the largest number of new Pokemon added to the main game since Pokemon Black and White. So far, only a select few have been revealed, but other leaks have talked about new Pokemon, such as a salt Pokemon similar to Minecraft, or a double-type electric frog. More official information about the 9th generation games is likely to appear in a few weeks, and perhaps both Paradox Pokemon and regional fakes will be revealed by the launch.