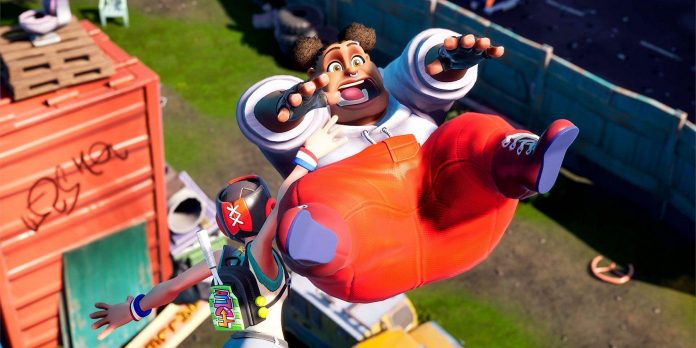 On August 11, fans of the royal battles will receive a new playground for competitions, as Rumbleverse Iron Galaxy is launched on this day. Although the game has previously suffered from delays, several major game tests conducted over the past few months have proven that Rumbleverse is ready to attract attention. Ahead of the game’s release, developer Iron Galaxy has unveiled some new features that players can try out in Rumbleverse on launch day.

First announced during The Game Awards 2021, Rumbleverse is described as a free battle royale like no other. While it’s true that players will still be fighting each other in a location that is gradually narrowing down into Rumbleverse, the way it will play out will be completely different, as it’s a hand-to-hand combat-oriented game with elements borrowed directly from the 3D fighting game genre. Up to 40 players can simultaneously exchange blows in this seemingly comedic royal battle with a pronounced wrestling atmosphere.

In a PlayStation blog post, the Iron Galaxy team detailed two new game modes that will accompany the standard Solo Mode in Rumbleverse on launch day. Firstly, this is a Duos mode in which each player is next to a friend, where they will protect each other from other pairs, with the biggest problem being that they start with fewer stats slots and a reduced health scale.

As expected, the duet mode in Battle Royale games will require good communication and teamwork, especially since players will not have access to the Superstar Comeback system when loading into Rumbleverse in pairs. Instead, when a teammate is eliminated, the player will receive additional stats cells and additional maximum health. However, this can be avoided as players will have a short time to revive their teammates who are running out of health.

The second new mode is Playground Mode. In fact, this is a standard Rumbleverse training mode in which players can freely explore the game world while learning game mechanics. Interestingly, players can also bring a friend to the Playground server, and they will have the opportunity to practice fighting each other, as well as messing with all the items and special techniques that Rumbleverse can offer.

Players will have one week to try out something in Rumbleverse before the real action begins on August 18 with the start of the first season and the associated battle pass. Iron Galaxy confirms that the Battle Pass will cost 1000 Brawla accounts (the in-game currency of Rumbleverse), but the game can be downloaded for free on PlayStation, Xbox and PC through the Epic Games Store.

Rumbleverse is released on August 11 on PC, PS4, PS5, Xbox One and Xbox Series X/S.

Ubisoft is looking for employees for its big “Star Wars” video...