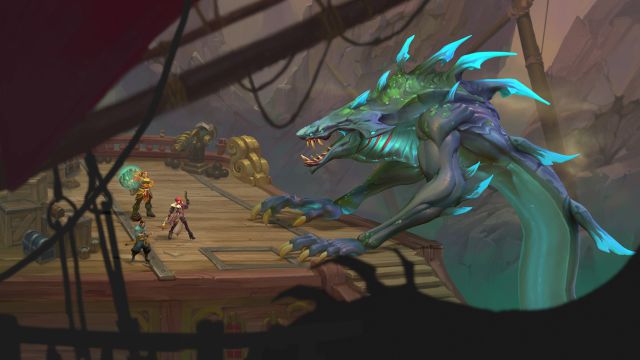 Ruined King: We analyze the new turn-based RPG from Airship Syndicate that arrives in full expansion of the Riot Games MOBA universe, and with a great overall finish. With the release of Valorant, Riot Games definitely put the plural in the word “Games”. But it was not until November 2021 when the company has let its hair down and made its most popular franchise, League of Legends, be approached simultaneously from several angles other than the traditional MOBA. First with Arcane on Netflix and now, in a more modest but also very interesting way, with Ruined King, a turn-based RPG from Airship Syndicate. Ruined King doesn’t reinvent the wheel, but it does offer a solid role-playing experience: a hackneyed but competently developed storyline, spectacular art direction, and a cast of beautifully played characters.

Set between the port city of Bilgewater (in Spanish Bilgewater) and the Shadow Isles (Shadow Islands), 6 are the main champions in charge of stopping the next wave of harrowing, a thick green and black mist that consumes the souls of all the one who finds. Coming from distant lands like Ionia or the Frejlord but also counting on local talent, personalities like Miss Fortune, Pyke, Illaoi, Ahri, Braum and Yasuo will team up to stop the advance of Viego, our Ruined King, who has been awakened and desperately looking for his former love. Ruined King is a classic plot of villains against heroes, with all the basic archetypes in this type of story. It has its arcs of redemption, of searching in the deepest part of being, etc. that we have seen a thousand and one times but it is carried in a very professional way and it never becomes heavy. The rhythm is sometimes irregular but with its narrative it tells an adventure that is very easy to follow and digest and you always want to keep going, which we cannot say about all games of this type.

Once inside, we find an approach very similar to the one we saw in another title from the same developer (Battle Chasers: Nightwar), with an isometric perspective almost always during navigation through the scenarios that turns to the side during combat. This combat is in turns but offers great flexibility to the player to configure their actions according to the needs of the moment, being able to choose 3 intensities of each attack or skill with different effects, intensity and speed depending on what we choose. There are basically 3 lines: the fast, the normal and the strong in which we can place our actions in case we want to act sooner or later and play not only with the strategy of what to use but also with that of when to use it. It is a very intelligent system that is very easy to learn, although the game is adding variants and complicating the player’s life with new mechanics around this system even until the last final boss.

Although each character has a role in which they mostly perform better, it is a detail that Airship Syndicate has left open the possibility of building our characters as we want. From the highest difficulty modes (veteran or heroic), you have to refine a lot more with what you use at all times because the combats are usually more demanding, yes. But in general Braum will be a pure tank, Illaoi will tank and heal, Yasuo and Pyke will be the ones who will do more damage while Miss Fortune also hits hard but adding altered states. Ahri … will do everything, it depends on how we build it, being the clearest example of the versatility in the configuration through the assignment of skill points, runes, weapons and enchantments. The system is flexible and encourages the player to experiment, especially since no change is permanent and we can swap almost everything at almost no cost.

Even at the lowest level of difficulty we can do without fighting completely, if we wish, and dedicate ourselves to continuing the adventure or enjoying the scenarios without worrying about being interrupted for a battle. There is relatively little variety when it comes to in-game locations, but at least Joe Madureira’s studio has designed them really well; The style of League of Legends has been respected and it is a pleasure to see from another perspective the city of Bilgewater or the decadence and feeling of coldness in the Shadow Isles. It would have been great to give the cities a little more life, especially since we spend a lot of time in them; the NPCs are always still in the same place, for example, and although the drawing is very good and the setting is very correct, they lack some “atmosphere”, so to speak.

WWE 2K 23: 5 Superstars Perfect for the Next Demo Mode