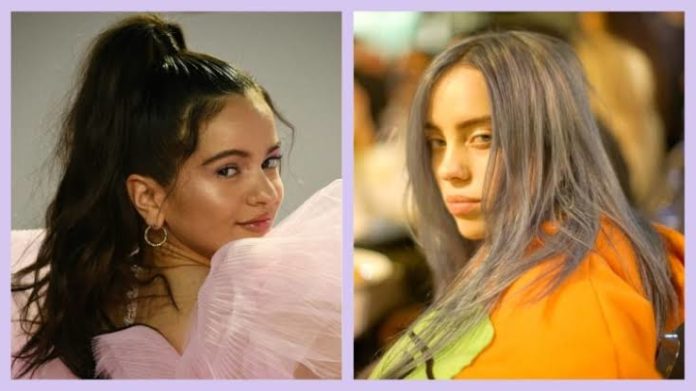 Earlier this year, all alarms went off when we started reading the names of Rosalia and Billie Eilish in the same sentence. No, it was not a dream. Both had got to work with a collaboration.

And not only we tell it, but these two young promises of the music industry through interviews and publications on social networks. Without going any further, the interpreter of Bad Guy confessed him in an interview, where he took the opportunity to launch the odd compliment. “He knows what he really wants,” he said.

Days later, Rosalia shared a photo with her professional partner with the following words: “I can’t wait to finish our song. Sharing with you in the studio or seeing you yesterday act inspires me a lot. I love you.”

Come on, we both have made it clear that the passion for music is not the only thing they have in common, but the admiration they feel for their respective works.

Now that the collaboration had already gone unnoticed among her followers, the Con Altura interpreter has brought her back to the front pages of all media after mentioning her in an interview with Billboard. In it, he has revealed how this long-awaited project began to forge, which already opts to become one of the most impressive in the industry.

“When I published Malamente, Billie was one of the first great artists who shared the video. She has been from the beginning. Then, when I was working with Frank Dukes in Los Angeles, Billie and I shared a session together, completely independent of their others. projects. We wrote with her on the piano. We came up with a great idea for a song and we had a great time, “Rosalia confessed. New details that advance where the subject’s shots will go.

From the collaboration it has also been known that Rosalia has managed to sing “notes that I had not even thought of before”, as the Californian explained in an interview. This anticipates that the theme will bring unpublished sounds.

As we mentioned in previous lines, our protagonists have been building a relationship that crosses the frontier of the professional field. Pure friendship! And, in an interview with LOS40, Billie herself said that, after seeing Rosalia perform in Coachella, she felt that it made no sense to go on stage to offer her performance. “I really thought I couldn’t get over something like that,” he said.

Given these statements, we can add that: what unites music, that no one separates. We want to hear about Billie and Rosalia! And we want to hear it … now! Although everything indicates that we will have to wait, because its release date is unknown.

New images change a picnic for a disastrous event