Home Celebrity Romantic comedies based on Shakespeare’s works: “10 things I hate about you”,... 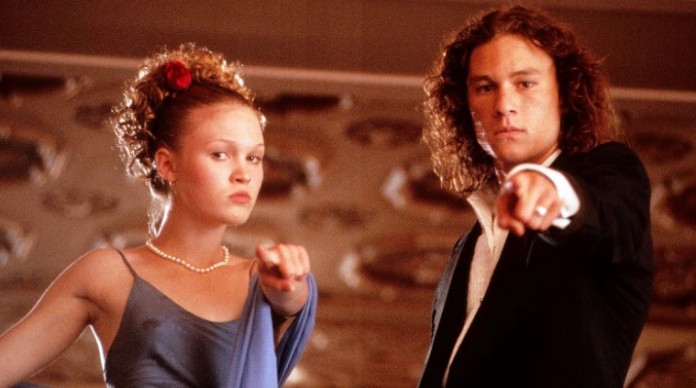 The whole world is a stage — and the perfect inspiration for a romantic comedy storyline! Many favorite romantic movies were inspired by the Bard himself: William Shakespeare.

“10 Things I Hate About You,” the 1999 cult classic film starring stars like Julia Stiles and Heath Ledger, was originally inspired by Shakespeare’s The Taming of the Shrew.

The film tells the story of sisters Kat and Bianca Stratford (played by Stiles and Larisa Oleynik, respectively) when they are experiencing school romances. While Bianca was forbidden to date until her older sister did, Cameron James (Joseph Gordon-Levitt) came up with a plan to be able to ask Bianca out: get local bad guy Patrick Verona (Ledger) to woo Kat.

The plot of the film is similar to the play of the 16th century, in which Lucentio cannot marry his beloved Bianca until her “obstinate” older sister Katerina marries first. The eccentric Petruchio teams up with Lucentio to charm the reluctant Caterina and turn her into an obedient wife.

“We were recruiting so many of our friends to find fairy tales or fables, and one night a friend said, ‘Guys, you should play in The Taming of the Shrew, that would be great,'” screenwriter Kirsten Smith recalled Refinery29 in June 2019. about her writing process with co-author Karen McCalla. “He offered to change the gender, but after thinking about it, we decided that it would be better [in the original form].”.

She continued, “We were looking for this perfect idea for teenagers, and as soon as we settled on The Taming of the Shrew, we went to Mexico, where Karen had a timeshare, and spent a week outlining the scenario on the beach. We returned to our states and wrote the script from a distance. This was before the internet [was a big thing], so we sent each other pages by mail and facsimile scenes. It was very low-tech!”

“10 Things I Hate about You” became a turning point for romantic comedies based on Shakespeare’s famous plays. Amanda Bynes and Channing Tatum starred in the 2006 film She’s a Man, inspired by the film Twelfth Night. In the film, Viola from Bynes conceived the idea of taking the place of her twin brother Sebastian (James Kirk) at a new boarding school to join their football team after her own team was downsized. There she soon falls in love with her roommate Duke (played by Tatum), who is crazy about popular classmate Olivia (Laura Ramsey).

The OG performance followed a similar story when Viola, separated from her twin Sebastian, posed as a boy while working for her lover, the Duke. However, the Duke is in love with Countess Olivia and enlists Viola to court her on his behalf, despite the fact that Olivia falls in love with Sebastian Viola.

“I totally fought for Channing [to get the role] in this movie because he wasn’t famous yet,” the Amanda Show graduate told Paper Magazine in November 2018, calling the film an “interesting” experience overall. “He just did a Mountain Dew commercial, and I thought: “This guy is a star, every girl will love him!” But [the producers] said, “He’s much older than all of you!” like, “It doesn’t matter! Believe me!'”

Scroll below to see more of the best romantic comedies based on Shakespeare’s works:

’10 things I don’t like about you’
In a 1990s—era film, a new student, Cameron, hoped to woo the popular Bianca-if he could find someone willing to date her older sister, Kat. Enter: Patrick Verona. The bad boy from Padua High School—another Easter egg to the original play set in Padua, Italy—eventually won the heart of the reading feminist Sylvia Plath.

‘She’s a man’
Loosely following the premise of Twelfth Night, the 2006 comedy showed Viola Bynes loafing after her high school cut the girls’ soccer team and refused to let her try out for the boys’ team. In retaliation, she wanted to join the team of their biggest rivals and win during their big game. Since her twin brother has left the country, she poses as him at the Illyrian Preparatory school. However, Viola’s infatuation with her roommate Duke complicates the situation, especially considering his feelings for Olivia’s classmate.

“Survive it”
Kirsten Dunst, Ben Foster, Shane West, Colin Hanks and Mila Kunis played the main roles in this free adaptation of A Midsummer Night’s Dream. The film, released in 2001, tells the story of Burke Landers (Foster), who was going to get her ex-girlfriend Allison (Melissa Sagemiller) back by joining her in a school play in which she starred with her new beau. At the same time, his friends are trying to help him find a new girlfriend.

‘Warm bodies’
There has never been a more sorrowful story than the one about Zombie R and Julie’s man. Nicholas Hoult and Teresa Palmer played star-crossed lovers in the 2013 comedy about the growing distance between humans and zombies. In the midst of a terrible plague that has divided the world’s population between two species, R saves Julie from a zombie attack before they embark on an unusual romance.