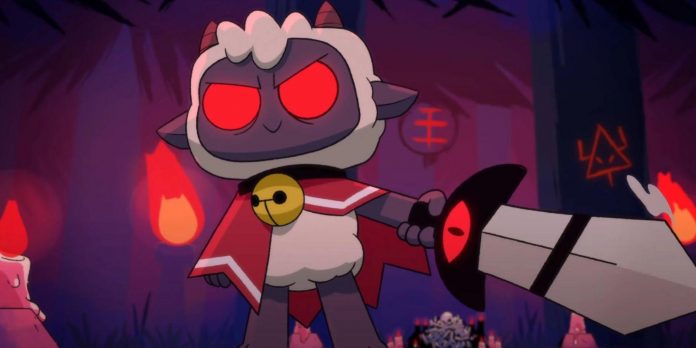 Roguelike fans looking for an upcoming game to play should keep an eye on the upcoming Cult of the Lamb. This week at Summer Game Fest, publishers Devolver Digital announced its release date – August 11. Massive Monster’s upcoming cultist roguelike game features a fresh take on the genre that mashes in community management in a similar vein to games like Frostpunk, all the while Cult of the Lamb sports a cutesy art style with horrifying undertones in its gameplay.

Announced during 2021’s Gamescom, Cult of the Lamb’s unique style immediately made gamers take notice. Published by Devolver Digital, the game seems to look to feed into popular culture’s fascination for cults, joining the ranks of games like the virtual card game Cultist Simulator and even The Last of Us 2. But, that’s far from the only reason why roguelike fans should keep an eye on this game.

Join the Cult of the Lamb

Thus far, previews of Cult of the Lamb have been quite positive, making it a must-have game for fans of the roguelike genre. A key highlight is how Massive Monster manages to balance roguelike dungeon crawler and community management gameplay to near perfection.

Players take control of a possessed lamb that was saved from being used as a sacrifice by a mysterious stranger, of which the lamb then starts to build a cult in their name. The lamb’s main mission throughout Cult of the Lamb is to venture across strange regions to recruit and grow a community of loyal cult worshipers by spreading the Word in a world of cute and horror.

However, there is also a sinister mission that lay underneath the seemingly cute game – the lamb must allow its cult to become the one true Cult. The titular character, alongside other cult members, thus must also destroy rival cults and eliminate their leaders in order to assert dominance across the land in a tale of revenge.

Cult of the Lamb’s roguelike gameplay similar to Don’t Starve, players venture out into the vast expanse playing as the titular lamb, across procedurally generated levels, and fight against masses of enemies from rival cults and beyond before the lamb meets its eventual demise. By the powers of the mysterious stranger, the lamb is resurrected and returns to the cult’s ever-expanding village to regroup before setting out into dangerous territory yet again.

But aside from committing mass murder in the name of the gods to rid off rival cults, the upcoming roguelike game exploring the world outside the village allows players to collect resources that can be used to build new village structures and improve the lives of cult members – which the player can also expand through their adventures – and perform dark rituals in order to appease the gods. While at the village base, the lamb also has to perform sermons to maintain the flock’s faithfulness to the Savior.

One of the highlights of the game is its near-complete customization capabilities, allowing each Cult of the Lamb experience to be completely different from the next. The player’s camps can have their buildings placed the way they wish, akin to Stardew Valley farms. Plus, each new cult member recruited can be fully customizable and come with their own unique traits and fears. Once recruited, cult members can be put to work to help sustain the community through tasks like cooking, farming, harvesting, or gathering, that will take the burden off of players over time.

Ewan McGregor was horrified by his role as the real designer...