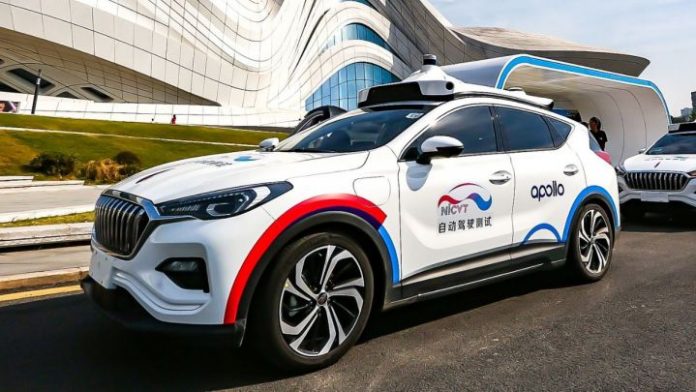 Films as iconic as Total Desafio – the good one, Verhoeven’s – have been showing automated public transport for decades. And since Tesla began the path of autonomous road vehicles, one of the goals of dozens of car companies, robotics, advanced AI is to have autonomous buses and taxis operating on the streets of urban centers.

In fact, we’ve been talking about them for years, like the autonomous bus prototype tested in 2018 in Stockholm, Sweden. But with technology nonstop evolving by leaps and bounds in the fields of AI, Environment Detection, Image Analysis, Real-Time Processing, and more, that future seems increasingly present.

Baidu, a Chinese multinational founded in 2000 specializing in Internet services and Artificial Intelligence, and owner of the popular search engine Baidu – China’s Google – began testing autonomous vehicles in the Chinese city of Cangzhou in the summer of 2020.

But it is now that it has obtained from the Cangzhou traffic authorities the permits for 35 vehicles with which to demonstrate the possibilities of “commercialized autonomous driving”, along with permits for 10 vehicles to perform driverless tests.

These permits will allow Baidu to be “the first company in China to experiment with various monetization mechanisms for autonomous driving services.” Baidu Apollo will be able to deploy ‘commercialized demonstrations’ of its smart transportation services, exploring different ways for a customer to pay for the service of one of these autonomous taxis, such as:

See if your CPF is among the 223 million leaked this...

The developer of the “Love Bug” virus that affects millions of...