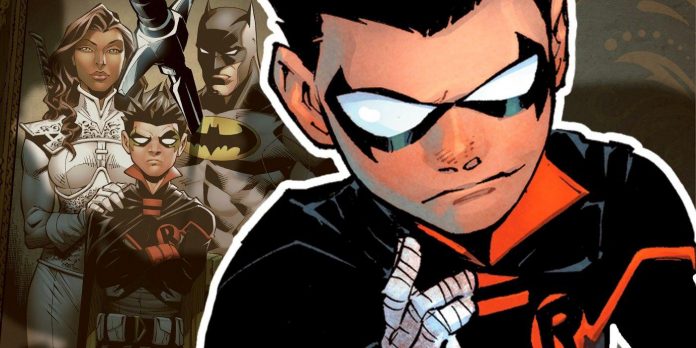 An unexpected addition to the bat family, Damian Wayne’s Robin struggled with his father’s strict rules as a superhero, but eventually found his place in the wider bat family. Now, more than 15 years after his introduction to the DC universe, it seems that Damian’s arc as Robin has finally come full circle with one important moment of personal acceptance.

Although versions of the character have already been toyed with, Damian al-Ghul was officially introduced to the DC universe as the son of Bruce Wayne and Talia al-Ghul in Batman #655, part of Grant Morrison and Andy Kubert’s Batman & Son arc. The storyline ends with Damian, raised by his mother as a murderer, and Batman, unaware of his existence, being pulled in different directions by his parents while they argue on a submarine. — Do I have to choose? Damian asks. “I’d rather we were all together.” Robin #15 ends about the same way: Damian is standing on the dock, and Bruce and Talia are fighting for his company. However, Damian, now Robin and using Wayne’s name, makes a completely different decision this time. He doesn’t want his parents to stay together, and he doesn’t want to go with either of them. Rather, he just wants them to “respect each other and respect [his] choice not to go with either.”

“Robin #15” by Joshua Williamson and Roger Cruz comes right after Williamson’s “Shadow War,” a crossover event spanning the titles “Batman,” “Robin,” and “Defstroke Inc.” the war between Detstroke and the League of Shadows. Now that Damian and his parents are reunited, this rejection of the binary dynamics in his family is a powerful conclusion to the arc of characters that has been created for more than a decade.

The shot of Damian standing between his mother and father near a pond clearly reflects the aforementioned scene from Batman and Son, which opens the issue as a flashback. This deliberate parallel shows how far the character has come since his original storyline, going from an unrepentant child killer to his father’s reformed partner, and now a man seeking to find his own way in the world. Damian ends the Shadow War on much better terms with his father than he started— Alfred’s death separated them for several years—but still admits that he needs to complete his journey of self-discovery. This is a touching and powerful moment for the character, which was made even more impressive by Batman’s response: “Son, when you need, you will always have a home with me. I trust you.”

It’s unclear what the future holds for Damian Wayne and his place in the bat family. In the near future, Tim Drake will return as Robin in Batman #125, and Damian will fight his father in the September Batman vs. Robin event. Now that his arc has come full circle, Damian Wayne may soon completely abandon the title of Robin, finally establishing himself as an independent person.