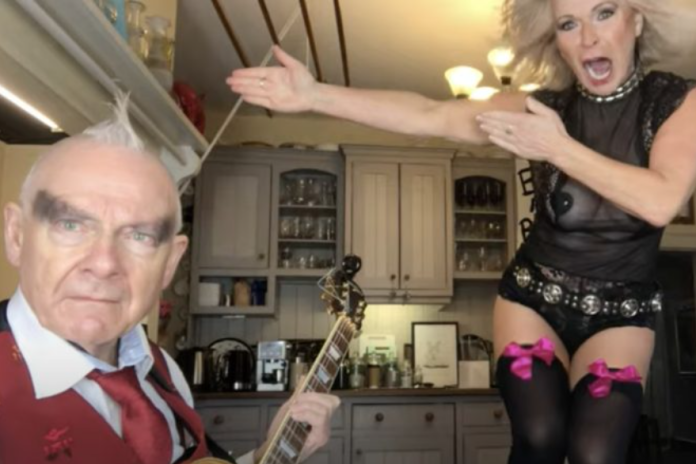 Fripp and Willcox began publishing cover versions weekly in 2020 on the latter’s official YouTube channel. In early videos, the couple performed classic tracks by artists such as Nirvana, David Bowie and the Sex Pistols from their home.

Speaking to The Guardian in early 2021, Willcox said she decided to launch The Sunday Lunch series to help her husband survive the lockdown period imposed by COVID.

“I do it with him all the time to make him laugh because he needs to laugh,” she explained at the time. “If people saw what we were doing, they would think we were nine years old.”

But the project is still gaining momentum: in recent releases, a pair of compositions “Blind” by Korn, “Mr. Brightside” by The Killers (featuring special guest Chesney Hawkes) and “Heroes” by David Bowie (in honor of the late Queen Elizabeth II) were presented.

However, during a new interview with The Telegraph, Fripp said that not everyone likes the joyful — and often strange —Sunday Lunch venture (via Louder). “[The series] upset some King Crimson fans,” he told the newspaper.

“At the beginning of self-isolation, my wife handed me a pack and a pair of her black tights, took me to the end of the garden and staged Tchaikovsky’s Swan Lake.

“My wife insists that artists are obliged to lift people’s spirits in difficult times. Do I respect that? My answer is yes, I completely and completely agree.”

Founder and guitarist King Crimson did not apologize for his Sunday lunch antics: “We are well aware of what people have experienced during isolation. I mean, you got fucked in a small apartment when your mother is dying and you can’t go to the funeral. My wife told me that if all we’ve done in two years is help one person in a difficult moment, then it was worth it.

“So I’m not sure if this meets the criterion of serving the highest in music, but for me it’s a real commitment that I respect. And I’m quite ready to put on a guitar and rock to a classic riff to achieve this.”

In a conversation with NME last summer, Willcox said that she and Fripp were developing their joint partnership into a “larger brand.”

“The goal is to make our website more like a TV station,” she explained. “We enjoyed creating content, and we’re going to go further. There will be a product line, but it will also start working like Toyah and Robert TV.”

Next year, Robert Fripp and Toyah Willcox will take Sunday Lunch on tour with them. They announced a joint 2023 tour back in June, but have not yet officially announced when and where they will play.

This show of the 90s should keep secret one huge question...