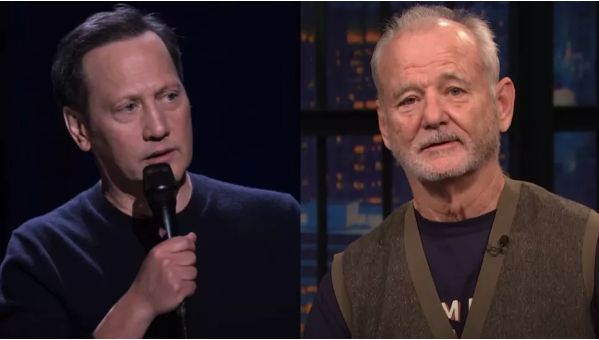 Rob Schneider is not afraid to share his candid opinion about the show “Saturday Night Live”, as well as about those with whom he worked and watched the show. After explaining the moment a few months ago when he thought the show was “over,” he now talks about how, in his opinion, Bill Murray “hated” the cast of the 90s SNL, especially Chris Farley.

For some background, Murray starred in the first seasons of Saturday Night Live from 1977 to 1980 alongside comedians such as Dan Aykroyd, John Belushi and Gilda Radner. Schneider worked from 1990 to 1994 and worked with Adam Sandler, Chris Farley and many others. According to THR, Murray appeared on SNL twice in the ’90s and hosted the show in 1994. When Schneider was interviewed on the Jim Norton and Sam Roberts show, he talked about his experience working with Murray, and it seems that this was not the case. good.

Schneider then explained that one of the actors Murray really hated was Chris Farley.

He hated Chris Farley passionately. He was just seething looking at him. And I think —I don’t know for sure — but I want to believe that it’s because Chris thought it was cool to be, well, like Belushi. You know, his friend, whose death he saw, that was cool to get out of control. This is my interpretation. But I really don’t know. I only believe 50%. He just hated us all very much.

Here Schneider is referring to the comparison of Belushi and Farley. It is widely known that the comedian, known for Tommy Boy, really respected the guy behind The Blues Brothers, and they both died of a drug overdose at the age of 33. The comedian suggested that since Murray was friends with Belushi, it was probably difficult to be around Farley, who was so similar. It’s important to note that Schneider said he only believes it 50%, but he doubled down on the fact that, in his opinion, Muarri really hates the cast of the 90s.

He also said that Murray really didn’t like Adam Sandler. The comedian said, “The least hate was for me.” Schneider said he “enjoyed” the fact because Murray was his “hero.” When the interviewer asked how Schneider knew Murray hated them, he said there was energy in him and he could see “naked rage.” He said he couldn’t explain why, in his opinion, the “Ghostbusters” actor hates them, he said he just “doesn’t get along with them.”

Along with these statements about Murray, Schneider explained that he thought SNL was over after seeing a sketch where Kate McKinnon sang “Hallelujah” with Hillary Clinton. After that, many of the show’s alumni came out against this claim; Al Franken noted that people had been saying the show would end since its first season, so what Schneider said was “stupid.” Alec Baldwin, who played Donald Trump on SNL for most of his presidency, also responded sarcastically to the 90s actor’s statement.

SNL’s long history is full of comedians, and I guess every generation is different in how they work and what they find funny. While Schneider talked about the show and those with whom he worked on it, “Saturday Night Live” remained a staple of the fall TV program and had just begun its 48th season.

You can watch the latest season of SNL every Saturday at 11:30 p.m. ET on NBC, you can also watch every season of the classic sketch show (including the Murray and Snyders seasons) with a Peacock subscription.

Ryan Coogler Talks About Why He Had Trouble Talking “They Were...