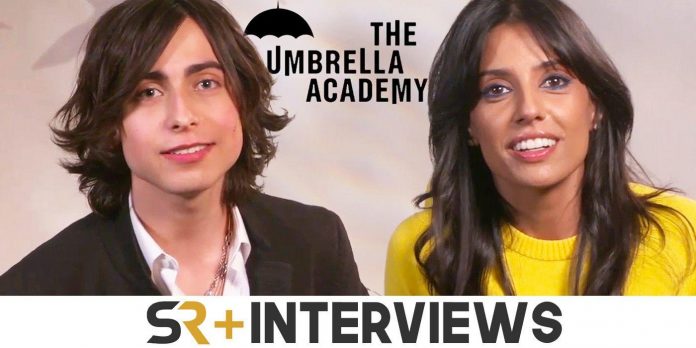 Time is yet again broken in The Umbrella Academy season 3. After narrowly escaping 1963 just prior to an apocalypse, the Umbrellas return to an alternate present day in which their moms died before they were born and Sir Reginald Hargreeves adopted seven other children to form the Sparrow Academy. While dealing with their new reality, the Umbrellas also learn of a new apocalyptic threat called the Kugelblitz eating everything in reality.

Ritu Arya made her debut in The Umbrella Academy season 2 as Lila, a mental patient whose developed a romantic relationship with Diego, only to later be revealed to be The Handler’s adopted daughter with abilities to mirror someone else’s powers. Aidan Gallagher stars as Five, the unnamed fifth member of the Umbrellas who has the ability to jump through space and time and developed a tentative relationship with the secretive agency of The Commission to learn of impending apocalyptic threats and determining a way to get back to his family after getting stuck in the future.

Screen Rant: So I’ve gotta say, I’ve been a fan of The Umbrella Academy since it started, and season 3 so far has been a blast to watch. What it was like for each of you getting the scripts for this season, because both of your character arcs are so different from what we’ve seen before.

Ritu Arya: Yes, yeah. It was very exciting getting the script and seeing where it went. We kind of were told a little bit beforehand of where it might go. I was excited to see the Sparrows and see their powers and how they would interact with the Umbrellas, I was excited to find out where Lila has been.

Aidan Gallagher: It’s an interesting season, it goes to a lot of different places. Strangely, it’s, in my opinion, the best season and it’s also the most tangential, like it goes off in so many different directions that actually relate back to each other. It’s quite a wild ride.

With Five and time travel, it’s so much to have to keep in mind. What is that like for you, as an actor, trying to keep all of these various sci-fi rules in your mind as you’re going into each scene?

Aidan Gallagher: It’s exactly how you put it. If there’s like a thing where that’s involved in the scene, I have to go through in my head, “Okay, what’s Five’s perspective on how the timeline works? What’s he actually cautious of?”

It’s not always a good instinct to have, though, as an actor. Because it can make some of the behavior seem non-related watching it back, like, “Oh, people probably have no idea why I’m acting confused at this moment.” But yeah, I hope the comic book fans appreciate it and they’re trying to follow along with Five’s logic.

This season also sees both of you interact far more often than we’ve seen before, including your fight scene early in the season. What was that like for you getting to reunite on all of those scenes together in a new light?

Ritu Arya: I was really excited to to get to work with Aidan some more. I think Lila and Five have a really great dynamic. They hate each other, but they need to work with each other to figure out why there’s this blip in the timeline and who better to work with other than someone who she thinks is probably the smartest one of the bunch.

From working together, they kind of bond, they can’t help but admire each other’s intelligence and so they kind of become friends. And that really felt kind of heartwarming.

Aidan Gallagher: They start a law firm by the end of the season. It’s crazy. Oh, no spoilers, that may want to be cut.

Crossing over into Daredevil season 4?

With that fight scene in particular, did you get to perform any of the stunts or was that all doubles?

Aidan Gallagher: We prepped for weeks to get that thing to get it look the best we could.

Ritu Arya: It wasn’t in the script originally. Basically, there wasn’t so much of the kind of war between them at the beginning that I felt like we could really use and Steve really liked that idea, too. So then this fight was there and then it kind of got bigger and bigger as we were in rehearsals and kept building with Tommy Chang and then it just became this big fight scene.

Aidan Gallagher: It’s quite a lot of fun, though, to learn. Because we had so much time, we were very involved with the choreography and trying to make it as real as possible. So when you actually watch it, hopefully it feels kind of like a Jason Bourne-type close quarters fight scene that ends up in this place of respect between the two characters. Almost as if it’s not about the fight at all, it’s just sort of a check-in.

Ritu Arya: Yeah, yeah, like a stalemate. Like, “Okay, cool. Let’s do this.” Although Aiden did whack me on the chin whilst we were filming it. I did forgive him, for accidents happen.

After putting a stop to 1963’s doomsday, the Umbrella Academy return home to the present, convinced they prevented the initial apocalypse and fixed this godforsaken timeline once and for all. But after a brief moment of celebration, they realize things aren’t exactly (okay, not at all) how they left them. Enter the Sparrow Academy. Smart, stylish, and about as warm as a sea of icebergs, the Sparrows immediately clash with the Umbrellas in a violent face-off that turns out to be the least of everyone’s concerns.

Navigating challenges, losses, and surprises of their own – and dealing with an unidentified destructive entity wreaking havoc in the Universe (something they may have caused) — now all they need to do is convince Dad’s new and possibly better family to help them put right what their arrival made wrong. Will they find a way back to their pre-apocalyptic lives? Or is this new world about to reveal more than just a hiccup in the timeline?

Check out our other interviews with The Umbrella Academy stars Robert Sheehan & Tom Hopper and showrunner Steve Blackman.

Krusty the Clown broke the golden rule of the Simpsons (for...