Home Entertainment Rings of Power: What to expect from the Lord of the Rings... 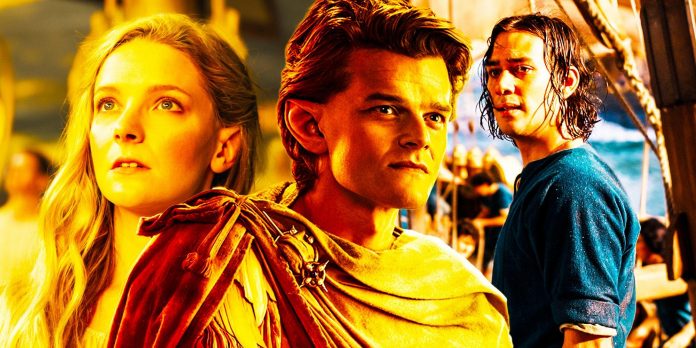 Related: How Amazon’s Lord of the Rings Show Directors Will Make Their Mark

Lord of the Rings: The Rings of Power Release Date Info

The Lord of the Rings: The Rings of Power’s Story

The story will draw on material from Tolkien’s appendices and books like the Silmarillion. One of the most important time periods in Middle-earth history is the Second Age, which includes Sauron’s rise and the Last Alliance of Elves and Men. The Second Age ended with Sauron’s defeat, as shown at the start of The Fellowship of the Ring. The Lord of the Rings: The Rings of Power takes place during the escalation of events leading to the great conflict between Mordor and the alliance of Men and Elves, and throughout the series, audiences will see the buildup to the first great struggle against Sauron.

Showrunners Patrick McKay and J.D. Payne have confirmed a few details about what to expect from the Lord of the Rings: The Rings of Power plot. The forging of the titular Rings will be a plot point at some point in the show (though there’s no indication as to whether this happens in season 1). Elrond and a legendary Elven blacksmith, Celebrimbor, will be central to this particular arc. In terms of the world of Men, Sauron and the fall of Numenor will be key features. Míriel, Numenor’s Queen Regent, will be navigating tricky waters as she tries to keep her island kingdom afloat against the rising threat of Mordor. On the subject of Sauron, both he and Galadriel will feature heavily in The Rings of Power, and their parallel ascensions to their respective positions are central to the plot.

Amazon’s Lord of the Rings: The Rings of Power Cast

A full cast list for Lord of the Rings: The Rings of Power has been announced by Amazon. Through it, fans can get a good understanding of the characters in the Lord of the Rings show and what storylines to expect. In terms of established characters from The Lord of the Rings, most names from the Second Age of Middle-earth mentioned in the Peter Jackson trilogy are accounted for. Elrond will be played by Robert Aramayo, with Maxim Baldry filling the shoes of a young Isildur, and Morfydd Clark is Galadriel. Amazon has deliberately chosen actors that are lesser known – possibly after seeing how the lesser-known faces in Game of Thrones went on to become stars in their own right, feeding back into the viewership of the show via online clips of notable scenes circulating online.

In terms of new Lord of the Rings characters, most in The Rings of Power will be unfamiliar to audiences. Cynthia Addai-Robinson is playing Míriel, the queen of Numenor. Trystan Gravelle is her advisor Pharazôn. Isildur’s father Elendil is portrayed by Lloyd Owen, and Nazanin Boniadi is playing Bronwyn – a human healer with a forbidden love for the Silvan Elf Arondir (played by Ismael Cruz Córdova). Bronwyn has children too, a son named Theo played by Tyroe Muhafidin. Another human character with a connection to elves is Halbrand, played by Charlie Vickers, who supposedly is connected to Galadriel. In terms of Elves, Benjamin Walker will be the mighty Gil-galad, the High King of the Elves, and Charles Edwards is the Elven blacksmith who forged the Ring, Celebrimbor.

Related: LOTR: Sauron Can Appear in Rings Of Power Season 1 (But Not How You Think)

It’s not just Elves and Humans in The Lord of The Rings: The Rings of Power, though. Owain Arthur is Dwarven Lord Durin IV, prince of Khazad-dûm. Sophia Nomvete will play Dina, a princess in the same city. Plenty of Hobbits will make an appearance too, mostly from the Harfoot clan. Markella Kaevenagh has been cast as Elanor “Nori” Brandyfoot, and British comedian Lenny Henry is Harfoot elder Sadoc Burrows. Dylan Smith and Sara Zwangobani are Largo and Marigold Brandyfoot respectively. This cast list is far from extensive, however. Just like the original Lord of the Rings movies, The Lord of the Rings: The Rings of Power already has a cast and character list in the dozens. Some actors have been cast in codenamed roles too so as not to spoil plot details (including who exactly is playing Sauron – Bridie Sisson, possibly, judging from the trailer). Another actor in a mysterious role is Daniel Weyman, who is cast as the ominously named Stranger, and Joseph Mawle is an unknown villain dubbed Oren.

Amazon released a full-length trailer for The Lord of the Rings: The Rings of Power at SDCC 2022. The Comic-Con Lord of the Rings show trailer contained plenty of new footage from The Rings of Power, giving Tolkien fans their first look at the new old Middle-earth. Immediately, it’s clear that trouble is brewing. Viewers are greeted with footage of Elvish helmets being stacked on a battlefield, and a voiceover shortly after enters with “We thought our joys would be unending, we thought our light would never dim,” perfectly setting up the tone of the show and Middle-earth during the Second Age. Lenny Henry’s Sadoc Burrows tells an unknown person “The skies are strange,” which is followed by a meteor shooting through a cloudy night. Clips like this establish the premise of the show – it is the ending of an era of relative peace, and dark times lay ahead.

There are plenty of mentions of Sauron in the trailer and a few glimpses of a character some fans believe could be one of his forms, given that he could shapeshift in the Second Age. Most of the cast have a few shots in the trailer, and there are plenty of sweeping pans of the various Middle-earth locations that will feature in the show, including what appears to be Rivendell but could also be the Elven kingdom of Lindon. The Dwarven city of Khazad-dûm and Hobbiton also make an appearance. Galadriel is seen using a Palantir, the same kind of viewing orb that led to Saruman’s corruption in The Lord of The Rings, and the White Tree of Gondor is briefly shown.

Sauron’s eventual rise is the key feature of the trailer though. Most of the voiceovers and dialogue surround his emergence, including a surprisingly chilling moment when a wild-eyed man grabs a child’s arm and asks him “Have you heard of him boy, have you heard of Sauron?!” It’s clear that fans won’t have to wait long until conflict strikes Middle-earth. A lot of the trailer footage features burning buildings, armored elves riding across a battlefield, and orcs, and the look of the orcs in The Rings of Power has already received positive comparisons to the movies. The part of The Lord of the Rings: The Rings of Power trailer that got fans most excited, however, was the short clip right at the very end, just after the title slate faded – the reveal of the Balrog, looking almost identical to its iconic appearance in Peter Jackson’s The Lord of the Rings trilogy.