Home Entertainment Rings of Power: what are harfoots? 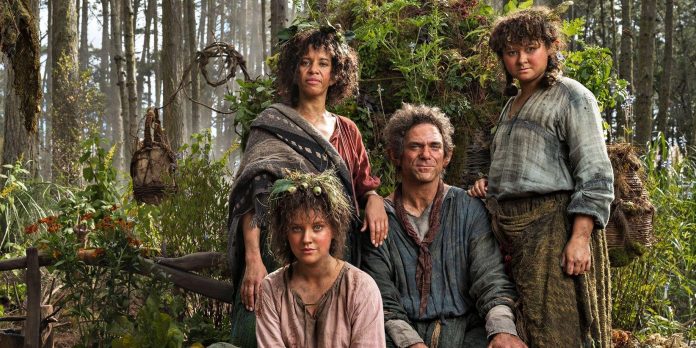 Hobbits are the basis of many stories taking place in Middle-earth. From The Hobbit to The Lord of the Rings, Hobbits tended to attract Tolkien’s attention the most, as they often turned out to be his main characters. They are unlikely heroes, coming from a society that prides itself on being as uninteresting as possible, which is what makes them charming. “Rings of Power” is no exception, as the show also seems interested in keeping an eye on Hobbits.

To be more specific, the show follows the Harfoots, in particular the character of Nori, a curious girl whose character doesn’t quite fit the decidedly less adventurous culture of her community. The show introduced viewers to the Harfoots at a basic level, but has not yet fully explained who they are and why a group of halflings is important to Middle-earth. What are Harfoots and how are they related to the hobbits that everyone knows and loves in The Lord of the Rings?

To get technical information, Harfoots were one of three types (or “breeds”) of Hobbits, along with Stools and Fallohides. It is not known exactly when Hobbits arrived in Middle-earth, but by the time they were discovered by other groups of people in the world, they had existed for many generations. The earliest known Hobbits were found in the Valleys of Anduin between Mirkwood and the Misty Mountains. It is believed that they could have been an offshoot of Humans, but by that time they had lost all ties with those who were called “Big People”. In the year 1050 of the Third Age (TA), Hobbits migrated through the Misty Mountains, probably due to the growing influence of Sauron in the Mirkwood near their dwelling.

All three tribes of Hobbits split up during the journey, but settled in the same places (Bree, Dunland and the Corner), so the division between the different types began to fade and become more unified, as it was in the Lord of the Rings. By the Third Age, groups of Hobbits had crossed the Baraduin River to settle there, which became the Shire. To the east, only Bree and a few other villages remain from the original Hobbit settlements in the Third Age.

Harfoots themselves were the most common type of hobbit. Their distinctive physical characteristics included that they were the lowest of the three types of hobbits, and also had browner skin. They had no facial hair, they walked barefoot and skillfully handled their hands. They preferred to live on hillsides and uplands in burrows, which they called smials, which is a tradition that persisted even during their migration to what later became the Shire. The Harfoots were friends of the dwarves and were the first group of Hobbits to migrate west. They reached Wethertop while Sturs and Fallohide were still in the Wilds.

When the Harfoots moved west to Arnor, they were discovered by the Dunedain, who called them “Periannates” (or “halflings”). The Harfoots settled for long periods of time and founded many villages in and around Weathertop. By the 1300s of T.A., they reached Bree, which became the farthest western of all Hobbit settlements, and remained so for quite a long time. At the same time, they were joined by the Sturs and Fallohides, and soon after (in 1601 A.D.) a Shire was founded, mainly by the population of Harfoots.

In Rings of Power, the Harfoots live in Rovanion, but are clearly preparing to migrate, which is probably due to the fact that they are the first Hobbit tribe to begin migrating from their original home. Rovanion is a flat area located between the Misty Mountains and the Woodlands, where the Hobbit tribes originally lived in Tolkien’s original legends. They have not yet said in the series exactly where they plan to migrate, but it is safe to assume that they are going to start moving west and maybe eventually settle in the Shire.

Harfoots are obviously timid people when it comes to outsiders, as they know how to hide from the “big people” and prefer to remain unnoticed by the world. This, of course, is disrupted by the appearance of a man in a meteor, with whom Nori is trying to make friends, and her other friend Poppy (perhaps rightly) is afraid. It will be interesting to see how The Rings of Power will continue to explore the Harfoots and their relationship with the rest of the world, and whether this will lead to them settling into what many fans now know as the Shire. One thing is for sure: “Rings of Power” continues the “Lord of the Rings” tradition of focusing its hobbit characters, which is understandable when they are as cute as they are.