Home Entertainment Rings of Power: This scene convinced people that the man in the... 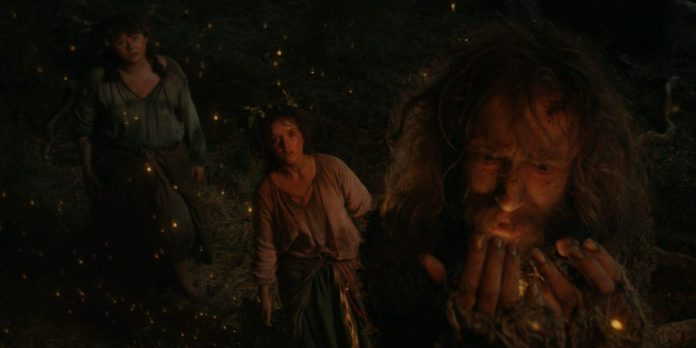 The first few episodes of The Ring of Power featured many characters whose identities are still unknown. However, one scene, especially in the second episode, convinced many fans that one yet unnamed character, the man from Meteor, is one of the most important figures in later stories taking place in Middle-earth: Gandalf.

In the series “Rings of Power” there are many moments inspired by Peter Jackson’s film adaptations of “The Lord of the Rings” and “The Hobbit”. One scene in particular draws so many parallels between the meteor man and the grey wizard that many fans are convinced that they are the same character, despite the fact that Gandalf will not appear in Middle-earth until the next era of the world, according to Tolkien’s original stories.

Nori and Poppy, the two Garfoots who originally found the man in the meteor and saved him from the fire, took him to a safe place and hid him. Later, they return to visit him and bring him food. Nori, the bolder and more inquisitive of the two, visits him more often, but late at night they go to visit him in the dark, taking with them lanterns full of fireflies. It was in this scene that many viewers were convinced that this is not just a tribute to previous adaptations, but a direct connection with the beloved wizard of the War of the Ring, who helps guide the brotherhood through all their dangers.

At the beginning of the scene, the stranger is clearly deeply upset and shouts in a strange language when Nori and Poppy get too close to him. From all their interactions with him, it became clear that at this moment he was not speaking the usual language of Middle-earth, but whatever he was shouting, it was probably an ancient language that the snake-legs had not heard before. What’s interesting is that when he shouts, the trees surrounding them seem to lean towards him. The sky is getting thicker and darker, and the lantern that Poppy is holding is getting too hot for her hands to touch it.

At this point there are three hints that it could be Gandalf. The first hint is that the trees subsequently become very close and trusting to the gray wizard, which is why he is such a faithful companion of the Ents. Secondly, the darkening of the sky is very similar to the effect that Gandalf produces in Bilbo Baggin’s living room in Bag End, when Bilbo accuses the wizard of trying to take the ring, which angers him. And thirdly, his obvious association with fire, which can be seen when Gandalf sets fire to pine cones in The Hobbit.

But as the scene progresses, one moment reinforces the idea that the stranger is Gandalf: his interaction with the firefly. He catches a small glowing creature as it flies past him, and gently holds it in his clawed hand, whispering his unusual speech to it. The insect flashes in his hand, and then he releases it into the sky, followed by several more fireflies imitating the first one.

It’s surprisingly similar to the scene from The Lord of the Rings movies, in which Gandalf is locked in the Orthanc Tower and catches a moth with his hand. He whispers to the moth in the same way and releases him to pass the message to the giant Eagle, who rescues him from captivity. In the newest series, fireflies seem to carry a message too. The meteorite man struggled to contact the snake-legs, and here it looks like he is trying to send them a message in the constellation of fireflies. But when they still don’t understand what he’s trying to say, he loses hope and all the fireflies go out.

That this person would be Gandalf makes sense in many ways, from his gray beard to his obvious ability to use magical fire. This also explains why the wizard loves hobbits so much, because it was these long-legged ancestors who helped him when he first appeared in physical form. As a Mayar arriving in an unknown world, it is logical that he will be lost, confused and vulnerable. It makes sense that he speaks an ancient language and does not yet understand the customs of this strange place. And in the love and care of the Harpoots for a complete stranger who scares them at the same time, a bond is forged that will last all the centuries of the world, from Nori to Frodo.

Peek at the Funny SMTOWN Artist Costumes at the ‘WONDERLAND 2021’...