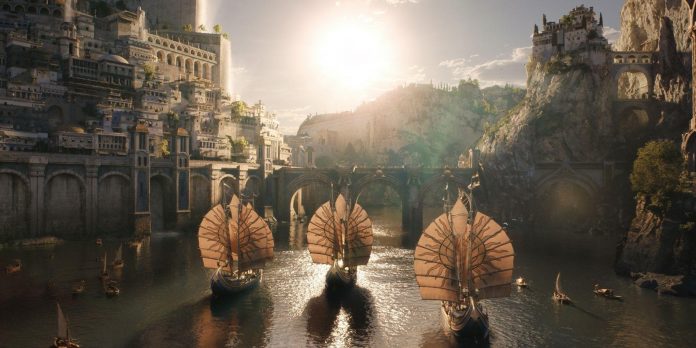 “Rings of Power” is one of the most beautiful shows in recent times, which willingly throws a comically huge budget on the screen in various ways. Its solid visual spectacle helps to lift the mood thanks to a charming script, cute and recognizable characters and a strong sense of immersion in a wonderful fantasy world that many fans have fallen in love with.

Episode 3 “Adar” introduces a new director to the series. Jurassic World: Fallen Kingdom director J. A. Bayona directed the premiere of the two-part season, but handed over the reins to Wayne Che Yip, who will shoot the next two seasons and the season finale. Yip is a prolific TV director who constantly worked on the TV series “The Preacher” on the AMC channel and shot many serious episodes of Doctor Who, including everyone’s favorite New Year’s special of 2019.

The Adar finds Galadriel and her new sailor friend Harbrand rescued from their seemingly grim sea circumstances on a regal ship. After a short argument, the strange couple finds themselves in front of the long-awaited new spectacle of the series. The series finally depicts Numenor, the kingdom of Dunedain, in all its glory. This is a magnificent place, reminiscent equally of Ancient Greece and Asgard. Galadriel discovers that although the city has a long-standing relationship with her kindred, they still despise the elves. The noble sea captain who brought them there is saddled with her abductor, as fans learn that the only thing the most powerful of the elves simply can’t do is negotiate. The show is likely to spend more time in the kingdom, and it’s a welcome new place for adventure.

Meanwhile, on the other side of the world, Arondir finds a dark secret in a deep pit that he dared to explore. An elven sentry and his fellow guards are captured by a small army of orcs and forced to help in their tunnel enterprise. The elves fight capture by making a daring escape that could lead to the end of their entire lives. The Orc camp is a nightmare, a scorched wasteland where nature is destroyed so that evil can flourish. This segment is dark, angry and eventful. The battle against a seemingly unstoppable force makes the scenes of violence more desperate and brutal than Galadriel’s elegant sword play. The cruel creatures speak of the new lord of evil, calling them by the Elven name Adar. Although the heroes don’t seem to have met the new main villain in town yet, dark things are clearly just around the corner for Middle-earth.

Meanwhile, the Harfoots are preparing for their nomadic caravan journey through the modest forests to their new home. Young Nori strives to understand the meaning and intentions of a seemingly mythical man who fell from the sky. However, her father Largo’s condition is not improving, which is why the Brandyfoot clan is nervous and afraid of being left behind in the most important ritual of their tribe. Nori sneaks around a lot and defies her parents’ wishes, as starman seems to still need her help. All of this seems very charming and bizarre compared to elven politics and fantasy prison break. This is most reminiscent of a 90s movie about a child who befriends an alien or a monster and has to hide them from his family. Tolkien’s works have always found time for the sweet pastoral life of little people, and this series aims to reflect his love for this perspective.

“Rings of Power” is far from perfect, but they still have so much fantasy magic inspired by his stories that they feel right at home. He still manages to feel epic and powerful, even when he focuses on small details and less central elements. However, the show is still a bit out of focus. The three central stories are sometimes unnecessarily pushed aside for others that don’t seem so important. The long-distance captain’s relationship with his children seems somewhat out of place in this episode, but perhaps this is a problem that will disappear after binge watching. The pace gets a bit erratic as it crosses a lot of events, some of which don’t seem to follow the same schedule. This is a fairly common problem for shows that simultaneously show stories A, B, C, and sometimes D, but it can be a bit distracting.

Rings of Power continues its huge pedigree and continues to deliver a lot of exciting fantasy spectacles. There are 5 episodes left, and the show is clearly gaining momentum for a lot of big interesting ideas. Unfortunately, the talk about the show was dominated by scammers using the show to incite hatred and decent people trying to stop them, which made its value as entertainment harder to discuss. Rest assured, Rings of Power remains a fun adventure with several exciting stories woven together, and there’s a lot more to enjoy on the horizon.

Grey’s Anatomy Season 18: The iconic character that will return with...